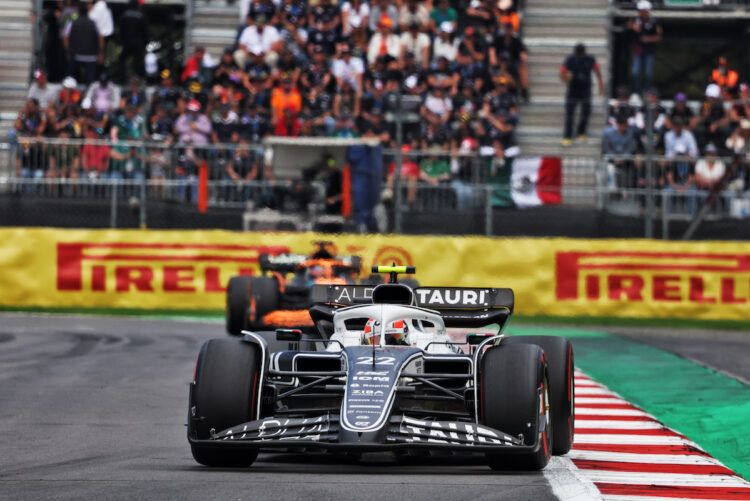 Yuki Tsunoda believes that Daniel Ricciardo’s overtake attempt at the Mexico Grand Prix was “pretty shocking” after it forced the AlphaTauri driver to retire.

The duo were battling for 11th place on lap 51 of the race, with Ricciardo attempting to get his car alongside Tsunoda’s on the entry to Turn 6.

However, Ricciardo’s front left tyre touched Tsunoda’s right rear, pitching the latter up into the air.

Tsunoda limped back to the pits, where the car was deemed terminally damaged by his mechanics.

“It’s such a shame, up until then it was super good. I managed well, especially in the first stint, the Soft tyre. I. gained positions,” Tsunoda said.

“It’s so shocking, how he overtook [me]. It’s almost impossible. He just sent it with the front wing and I had damage. I don’t know if he had damage, but it’s pretty shocking. It’s so frustrating.

“It would’ve still been a bit difficult [to score points], but I think it would’ve been close.”

Ricciardo was issued a 10-second time penalty for the incident, but managed to classify in seventh place due to having strong pace on the Soft compound late on.

The Australian suggested after the race that Tsunoda could’ve easily given him more space to avoid contact.

“It was mixed, but I also just saw the replay of the Yuki one,” he said. “It wasn’t a blatant ‘I’ve gone in, locked up and crashed right into him’.

“I feel like it was a little bit me… there are a lot of blindspots, but all we needed to give each other was 30 more centimetres and maybe we were good.

“The truth is, I wasn’t trying to lunge him in the corner, I was trying to stay there, hold him a little bit wide and then get the exit with the fresher tyre.

“But a 10-second penalty, that’s more than enough to justify that.”