Russell on Hamilton F1 battle: ‘Anyone else, I would’ve ran them off the road’ 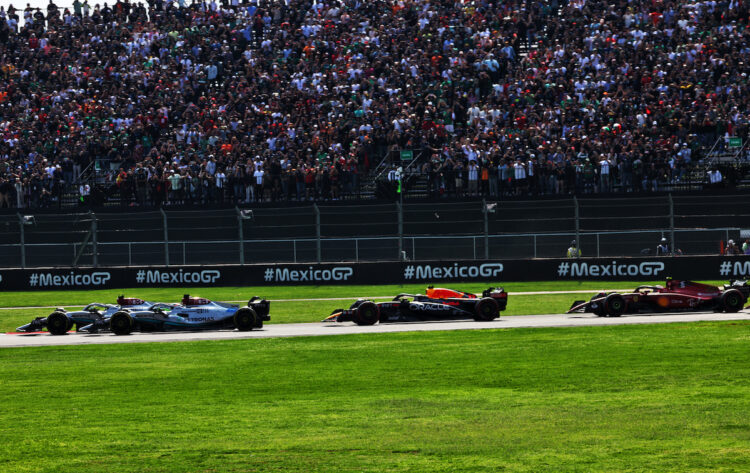 George Russell has reflected on his first lap from the Mexico City Grand Prix, after dropping from second to fourth in the opening corners.

The Mercedes driver was tucked in behind Red Bull’s Max Verstappen on the run to Turn 1, and pulled to the left as Verstappen defended the inside line.

He then went side by side with team-mate Lewis Hamilton, with the latter coming out on top.

Russell says that had it been anyone other than Hamilton alongside him, he admits he would’ve pushed them off the circuit to defend his position.

“I think the last four races have been pretty scrappy,” he told Sky F1. “Going into Turn 1, I knew I would’ve been able to overtake Max on the outside.

“With Lewis there, if it was anyone else but my team-mate, I probably would’ve just ran them off the road.”

Russell also dropped behind Perez on the opening lap, and was hopeful of catching the Mexican driver later in the stint, as he was running the Medium tyres compared to Perez’s Softs.

“At the beginning it was sort of management, I thought Checo was going to drop off,” he said. “He did slightly, I wanted to extend on that Medium. At the end I was pushing as hard as I could, but it was like driving on ice out there.

Russell was also heard calling for the Soft tyre for his second stint during the race, before Mercedes ultimately opted to fit the Hard compound.

“It’s so easy in hindsight, when we saw Latifi put on the Hards and going green and then Lewis put the Hard tyre on and going green, we thought that was going to be the right thing to do,” he said.

“But as soon as we went to the second lap, we realised that thing was not working.

“I would’ve been really intrigued to see what we could’ve done had we extended the Medium and gone onto the Softs, kind of like what Daniel [Ricciardo] did and had a strong race.”