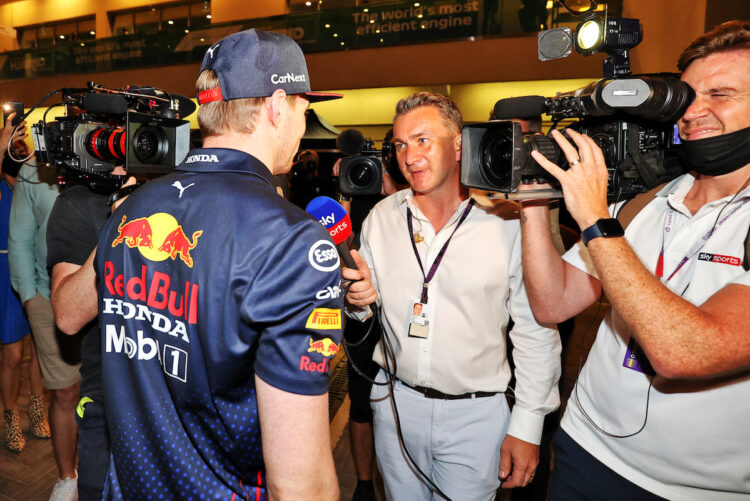 Max Verstappen is refusing to speak to Sky Sports after comments were made at last weekend’s US Grand Prix regarding his 2021 title win.

Last year, Verstappen was involved in a close title fight with Lewis Hamilton, with the battle coming to a head at the season finale in Abu Dhabi.

Verstappen won under controversial circumstances after Race Control allowed the lapped cars in between Hamilton and Verstappen to unlap themselves amid a Safety Car restart.

The procedure prompted an inquest from the FIA, who concluded that human error from ex-Race Director Michael Masi resulted in the situation, which went against the FIA’s own rulebook.

Verstappen didn’t speak to the British broadcaster after qualifying in Mexico, and according to Dutch newspaper De Telegraaf, Verstappen also plans to black out Sky Sports Italia and Sky Sports Germany.

What did Ted Kravitz say about Verstappen’s title?

The comment was made in ‘Ted’s Notebook’, a popular segment hosted by Kravitz following each qualifying and race session.

Kravitz was referring to movie star Brad Pitt being at the Circuit of the Americas last weekend, and that it would’ve been a strong Hollywood script for Hamilton to beat Verstappen in the US last time out to take his first win of the 2022 campaign.

“[Hamilton] doesn’t win a race all year, and then finally comes back at a track where he could win the first race all year, battling the same guy who won the race he was robbed in the previous year, and manages to finish ahead of him,” he said.

“What a script and a story that would have been. But that’s not the way the script turned out today, was it?

“Because the guy that beat him after being robbed actually overtook him, because he’s got a quicker car, because of engineering and Formula 1 and design, and pretty much because of [Adrian Newey, Red Bull’s chief technical officer] over there.”