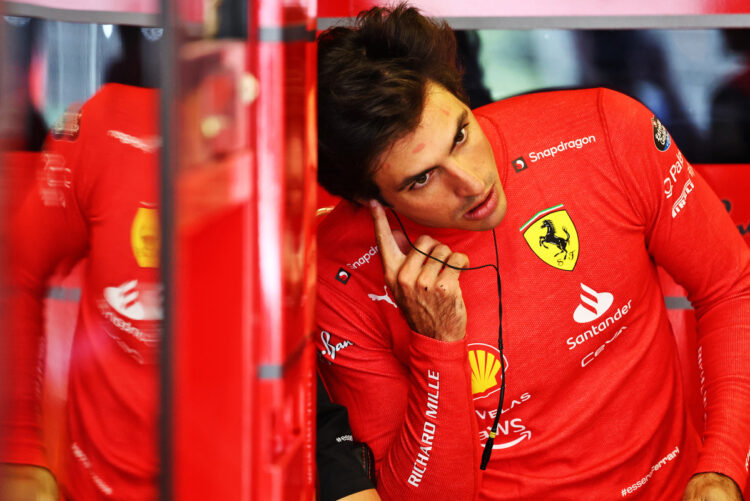 Ferrari’s Carlos Sainz highlighted the difficulty he and Charles Leclerc are having with the ride in the F1-75 in Mexico this weekend, after qualifying fifth and seventh, respectively.

However, the Spaniard insisted that he “cannot be too disappointed” with his starting position for Sunday’s race in Mexico City.

Sainz topped the first practice session on Friday ahead of Leclerc, but Mercedes and Red Bull have since turned up the wick, establishing themselves as the fastest two teams this weekend.

In a tough qualifying session, the 28-year-old was out-qualified behind both Mercedes and Red Bull cars, while Leclerc ended up behind the Alfa Romeo of Valtteri Bottas.

The cars have looked a handful to get through the corners this weekend, and that was especially true of the Ferrari, which lacked the qualifying performance we have become accustomed to seeing.

“We were fighting it a bit too much,” Sainz told Sky F1.

“Even if I put my sectors together, the performance was there to be in the top three with an 18.0. But when the car is so tricky around here with the little grip there is, to put the lap together, it’s very difficult.

“But it’s how it is, we know the compromises that we needed to take this weekend, and I cannot be too disappointed with the job we’ve done this week.”

Sainz was already aware of the issues that Ferrari would encounter in Mexico, but he conceded that the team had not anticipated the extent of the difficulties they would face with the ride of the car.

“I think we know why we are slow this weekend,” he added.

“We know which compromises we needed to take. We know the numbers, we know why we are not as fast as we would like to be.

“And, we need to find out why, because the altitude shouldn’t affect us, it should be more the ride and how, on the kerbs, today we were suffering.”