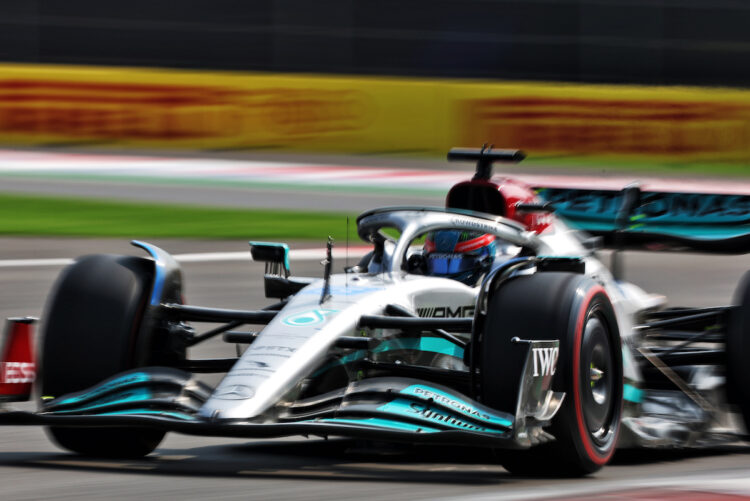 George Russell has expressed confidence that Mercedes will be able to take its first win of the 2022 Formula 1 season on Sunday in Mexico.

Russell and team-mate Lewis Hamilton will line-up in second and third respectively for the start of the race, behind pole-sitter Max Verstappen of Red Bull.

The energy drink-backed outfit has been dominant in 2022, securing the Drivers’ and Constructors’ Championship at the previous two rounds.

Mercedes has struggled for performance throughout the year, but has displayed strong pace at the Autodromo Hermanos Rodriquez this weekend – leaving Russell confident that it can end its drought on Sunday.

“I think Max did an excellent race today as he’s consistently doing week in, week out. But it’s going to eb very difficult to pass him.

“They’re gaining about three-tenths on us down the straight. So we definitely can beat Red Bull, for sure. But I don’t think we’re going to be able to make the overtake on track. We’re going to have to be strategic.”

Russell looked to be in contention for pole position in Q3, but a mistake in the final sector saw his effort unravelled.

Reflecting on the final moments, of the session, Russell said: “To be honest, I was a bit lost for words. The car has been feeling so good this weekend.

“Even though I missed FP1 [with Nyck de Vries driving his car], I was just in such a good groove. My first lap in quali, that groove just disappeared.

“In Q3, my last lap, I went around the first three corners and it felt great. I had this thought ‘this is going to be the lap’ and I lost the lap on the next corner. I was bitterly disappointed.

“I lost two tenths in one corner, I gained it back again, I was still one and a half tenths up before I then locked up in sector three. It was a chaotic 70 seconds, but P2 is a great place to be starting.

“I’m really proud of the team, this is the best qualifying of the day for us, we were quickest in every session apart from Q3, unfortunately.”