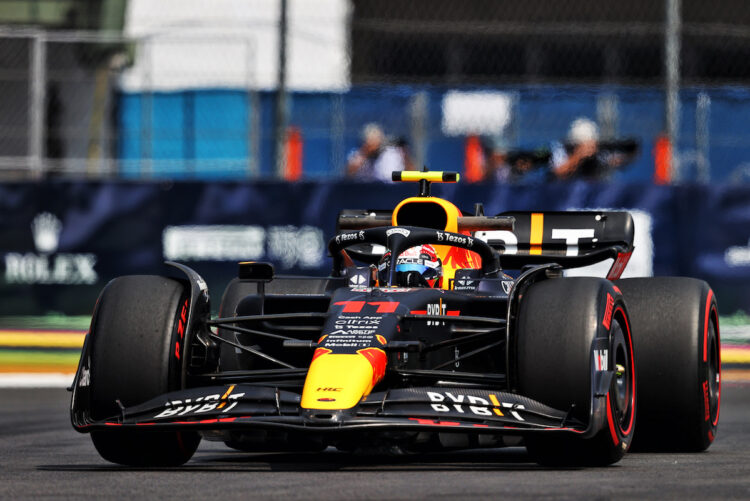 Sergio Perez says he expects Ferrari and Mercedes to provide Red Bull with a challenge at the Mexico City Grand Prix this weekend.

Perez enters the round hoping to achieve his first-ever home race victory, having received notable support in Mexico since the sport returned to the South American country in 2015.

Carlos Sainz ended the first practice session from the Autodromo Hermanos Rodriquez as the fastest driver, ahead of Ferrari team-mate Charles Leclerc.

The second practice session was allocated to Pirelli, who carried out tyre testing during the 90-minute outing.

“It was a tricky day as usual in Mexico, with the altitude,” Perez said. “Everything is floating around, it’s very easy to make mistakes in these conditions.

“Overall, I think FP2 was mainly for Pirelli but FP1, we got a good base. We seem to be there, Ferrari seems to be strong, also Mercedes. So it’s going to be a tough battle tomorrow.

“We got up to speed fairly quickly so it should be straightforward tomorrow, hopefully. But you can always expect different things.

“You basically miss FP2 because you are focusing on the Pirelli tyres. It’s how it is.”

Perez’s team-mate Max Verstappen made one of the biggest mistakes during the day, as he lost control of the car through the twisting middle section of the track.

The Dutchman compared it to driving on ice, with the track offering him little grip during the first session.

“I just had a moment, as soon as I came off-line it was like ice, I was just drifting left, drifting right,” he said. “I decided at one point when it goes to hold the brakes and not hit the wall.”