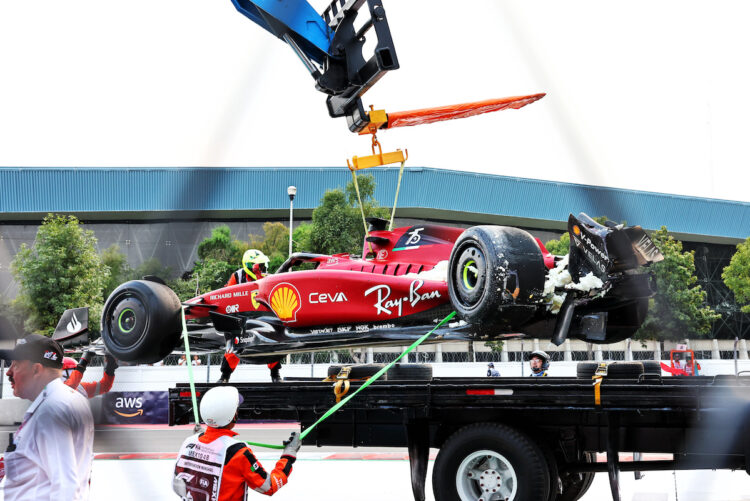 Charles Leclerc says the crash he suffered during the second free practice session in Mexico won’t impact the remainder of his weekend.

Leclerc lost the rear of the car early into Turn 7 at the Autodromo Hermaos Rodriquez on Friday afternoon, and made contact with the barrier rear-first.

There appeared to be significant damage to the back of the Ferrari car, but Leclerc doesn’t expect that it will mean a grid penalty due to new components.

“I don’t think any of it will compromise us,” he said. “I think we have enough pieces with all the penalties we’ve had in the past, so it should be fine.”

Leclerc was second fastest in the opening practice session behind team-mate Carlos Sainz.

The Monegasque driver states that he was happy with the feeling inside the car, giving him a boost of confidence for the rest of the weekend despite the setback in FP2.

“To be honest, the feeling is good,” he said. “We’ve been pretty unlucky in FP1 on my side, I had a puncture on the out lap, so not many laps.

“The few that I did, I was happy with the car. FP2 was the same on the short runs, then I lost the rear at the start of the high fuel [runs], so a limited amount of laps.

“Those were my mistakes, but I’m confident it won’t hurt our weekend.

“In FP2, we tried something on my car which I didn’t particularly like, so I wasn’t as much at ease at the car as I was with FP1. But I know what to do for tomorrow, so I’m confident the performance will be there.”

Leclerc is chasing his first grand prix win since Austria in July earlier this year, with Red Bull currently on eight consecutive victories.