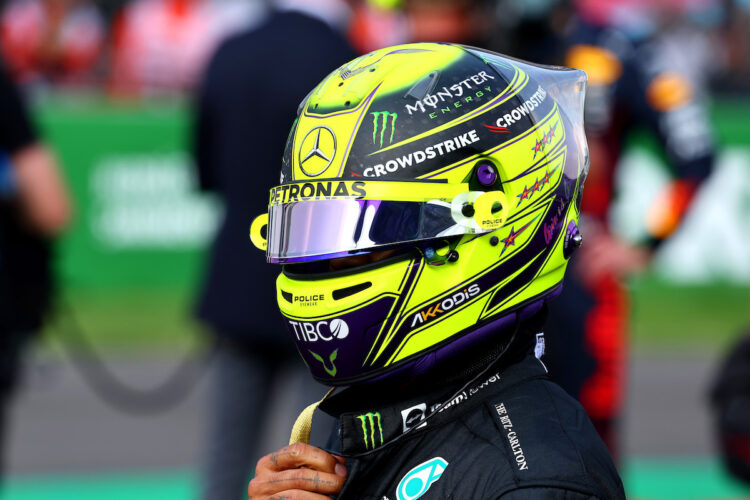 Lewis Hamilton has revealed that he suffered an engine issue during Q3, which impacted his pace amid a pole  position fight in Mexico.

Hamilton ended the session in third place, and is set to start Sunday’s grand prix on the second row of the grid behind pole-sitter Max Verstappen and team-mate George Russell.

Mercedes has struggled for pace throughout the 2022 campaign, with Hamilton yet to take a pole position or victory this year.

However, the seven-time World Champion says it was a positive session for the team, despite having an issue on his side of the garage.

“It was generally a really good qualifying session,” said Hamilton.

“We had some problems towards the end with the engine in Q3, so I think there was definitely a bit of performance left on the table with that, unfortunately, but I did the best I could.

“Losing that first lap definitely made that last one very, very difficult. I had to be very reserved on that last lap just to make sure that it was clean, because I was a tenth up into that point.

“Unfortunately not able to push as hard as I would have liked but nevertheless I think this is a great result, second and third.

“It’s not a bad position to start and I hope we can fix the engine issue for tomorrow.”

Expanding on the issue, Hamilton said: “It started to appear in Q2 and then it was every run in Q3.

“I was basically dropping out of power on exits of corners, so I definitely think we were losing quite a bit of time out of the last corner and most of the corners.

“Not really sure what was happening but it felt like an ignition issue. But I’ll find out from the team.”

Russell has suggested that Mercedes will be able to contend for the race victory on Sunday against Red Bull, having shown strong pace throughout the grand prix weekend.

Hamilton has asserted that he will give it his all as he searches to end his winless streak.

“Naturally it’s always a tough race around here, with the track temperatures and tyres, but these guys [Red Bull] have been rapid all year long,” he said.

“Even when we are at our best this weekend, we are still losing out to them in straightline speed, so it will definitely be difficult to get by tomorrow.

“But we’ll give it our best shot. Turn 1 is an opportunity, so we’ll go for it.”