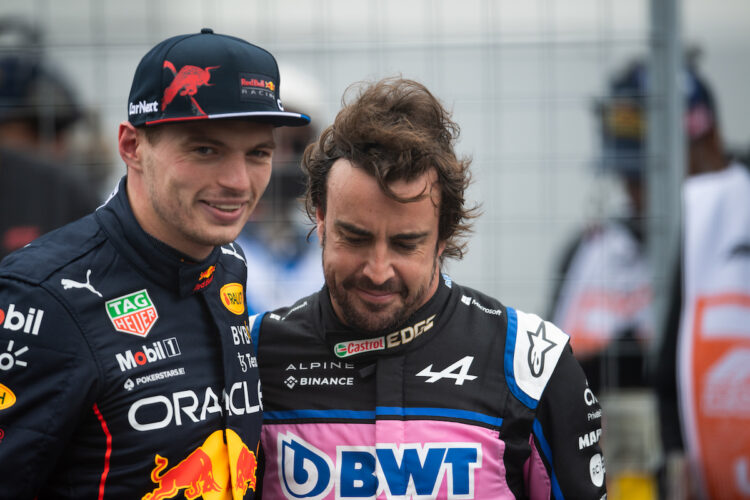 Earlier this month, Verstappen picked up his second F1 title amid a dominant 2022 campaign.

His second championship success came after a closely fought battle against Hamilton in 2021, when he prevailed over the Mercedes driver at the final round in Abu Dhabi.

Hamilton secured his first title in 2008 with McLaren, before enjoying a commanding stretch of results from 2014 to 2020, winning six of the seven titles on offer.

Although Hamilton has shaped himself into the most successful driver the sport has ever seen, Alonso believes that Verstappen’s championships hold more value.

“I have a lot of respect for Lewis, but still it is different when you win seven world titles when you only had to fight with your team-mate,” Alonso told Dutch newspaper De Telegraaf.

“Then I think a championship has less value than when you have fewer titles but have had to fight against other drivers with equal or even better material.

“In 2005 and 2006, I had a good start to the year myself and was able to create a lead. Then others might have had a better car, but I was able to manage that gap.

“I never had to fight with my team-mate to win those titles. Nor did I see Max fighting with [Sergio] Perez or [Alex] Albon to win races.

“But Schumacher in particular fought with his team-mate to become champion five times in a row and Hamilton fought with [Nico] Rosberg and [Valtteri] Bottas. That’s different, I think.”

Is Alonso right in his assessment?

Hamilton’s first F1 championship came in 2008, one year after missing out on the title in his rookie year to Kimi Raikkonen (Hamilton was also team-mates with Alonso that year).

The Briton bested Felipe Massa to the championship, but his next title wouldn’t come for another six years, when in 2014, he beat Mercedes team-mate Nico Rosberg to the title.

Hamilton prevailed over Rosberg again in 2015, before Rosberg won the title and retired days later in 2016.

Ferrari had mild attempts at a title challenge in 2017 and 2018 with Sebastian Vettel, while in 2019 and 2020, team-mate Valtteri Bottas was Hamilton’s closest challenger.

Alonso has since responded to the stories circulating on this topic, and offered clarification over his comments.