Marquez: Sepang weekend ‘most difficult in terms of performance’ 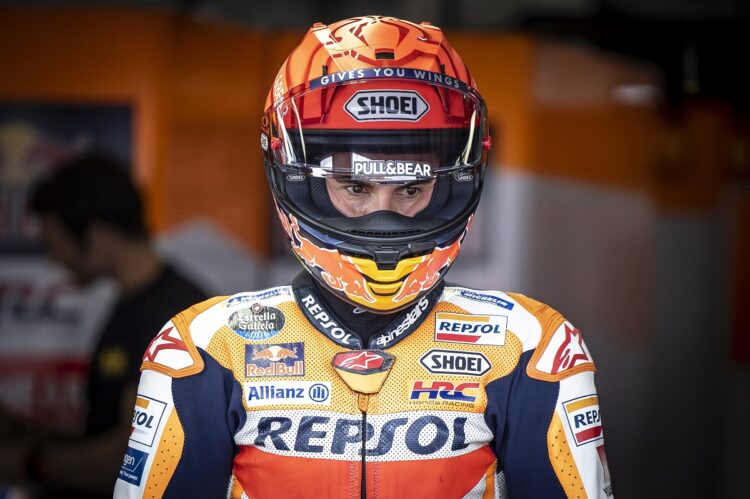 Marc Marquez conceded that his Malaysian Grand Prix event was his “most difficult in terms of performance” since returning to competition at Aragon last month.

The factory Honda rider struggled all weekend for outright speed at the Sepang International Circuit, the Spaniard narrowly making it into the pole shootout having found it tricky to post front-running times in practice – although he managed to drag his RC213-V to third on the grid in the pole shootout.

The six-time premier class champion started to drop back once the Malaysian GP got underway though, Marquez dropping to sixth early on after being passed by the recovering Ducati’s of Francesco Bagnaia and Marco Bezzecchi, as well as Yamaha’s Fabio Quartararo – though this would become fifth after pole-man Jorge Martin crashed out.

Marquez would eventually take the chequered flag seventh having later been passed by Suzuki’s Alex Rins and Jack Miller, leading him to admit that his Sepang outing was the “most difficult in terms of performance” since he returned to action in Aragon.

“I said yesterday my position was between eighth and ninth and in the end we finished seventh because of (Jorge) Martin’s crash so we gained a position there, and (Luca) Marini had an issue with his bike,” explained Marquez.

“We worked at 100% what was no normal was yesterday’s performance, I was pushing in the first two laps a lot to try and follow the Ducati’s but immediately I saw the speed was too much.

“I was losing a lot at the exit of Turns 14 and 15, and then you can take a risk over one or two laps but not over 20 laps because you will crash, so I accepted this and just tried to find my place.

“(Fabio) Quartararo and (Marco) Bezzecchi overtook me and were much faster than me but I found my place with the Suzuki rider’s, following them wasn’t so bad even though they were a little bit faster.

“This weekend has been the most difficult (since comeback) in terms of performance, all weekends so far I’ve felt that the bike has been OK and we can fight for the top five, but this weekend we have been far.

“At a track where the engine is important we need to have the traction in the long corners, and we were too far back and I was struggling a lot.”

Marquez revealed that he spent much of the weekend trialling modified parts on his RC213-V in a bid to try and “understand the concept” that Honda should follow to try and make good progress towards the front in 2023.

“The good thing is we got a lot of information for Honda, so now we need to work hard and improve the bike for next year because at this track we were too far back to fight,” continued Marquez.

“We didn’t have any new parts this weekend but some older ones with radical changes, just to try and understand the concept for the future.

“We know some things we tried did not work, somebody needed to try these things for Honda and they felt I should be the person to do it.”