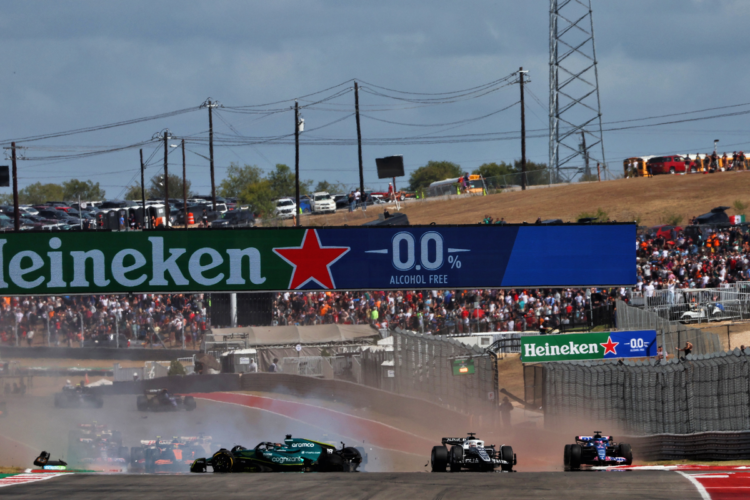 Former Formula 1 champion Jacques Villeneuve has slammed Lance Stroll for his involvement in the high-speed crash involving himself and Fernando Alonso, stating that the guilty Aston Martin driver should receive a suspension.

Alonso was lining up a move on Stroll and had a run on the Canadian down the back straight just after the first Safety Car restart.

As the Spaniard moved to the left in an attempt to pass, Stroll dangerously moved left as well which resulted in Alonso driving straight into the back of him.

Alonso was sent airborne by the contact with the rear wheel of Stroll’s Aston Martin and was sent careering into the barriers but astonishingly managed to continue until the chequered flag.

In his post-race column for Formula1.nl, Villeneuve wrote: “We had a pretty exciting race in America but not always for the right reasons. We saw a bit of everything.

“Masterful driving but also dangerous actions and drivers who drove badly. It was a mix of anything and everything, but that’s what this show is all about.

“When I talk about dangerous driving, I’m talking about Lance Stroll. He should be suspended for one race for the Fernando Alonso incident.

“The FIA ​​have been very lax in both Formula 1 and lower classes with drivers swinging out on the straight when that’s the most dangerous thing there is and the last thing you want to see. It’s pathetic and extremely dangerous.

“By swinging out on the straight, you endanger other drivers – possibly fatally, because you can cause a huge accident like that. And that’s because you consciously decide to do something like that, not because you’re making a mistake. So, it’s really unacceptable.

“The FIA ​​need to step up and hand out more penalties for this kind of action. Even if it doesn’t lead to an accident because we have been lucky it didn’t go wrong before. And it already starts in the lower classes.

The FIA have swiftly handed Stroll a three-place grid penalty for the upcoming Mexican Grand Prix for his involvement in the crash.

Alonso put on an immense recovery drive to finish in seventh place at the end of the race but was slapped with a 30-second post-race time penalty after his Alpine A522 was deemed to be racing in an unsafe manner from the damage sustained.