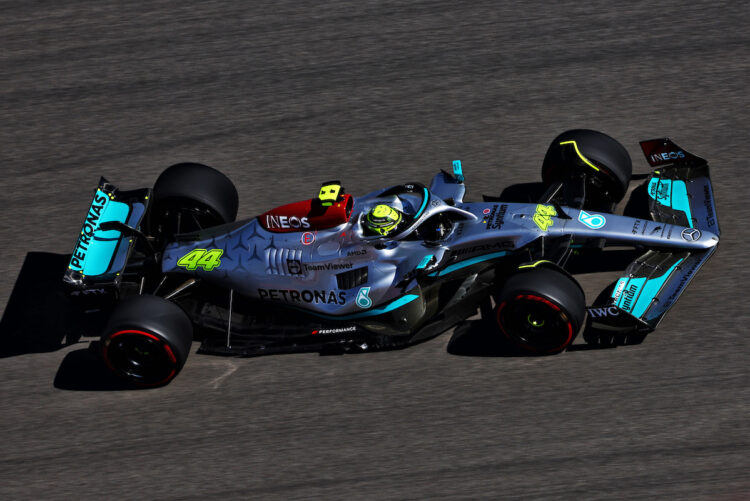 Toto Wolff has hailed Mercedes’ upgrade package at the US Grand Prix, believing that the new items are working as intended.

Mercedes was one of few teams that arrived at the Circuit of the Americas (COTA) with new parts.

These included upgrades to the front wing, floor fences and floor edge, as well as the rear wing endplate in a bid to boost performance.

The reigning Constructors’ Champions have struggled for pace against rivals Red Bull and Ferrari this year, and has not taken a race victory throughout the 2022 campaign so far.

On Saturday, it ended qualifying from COTA with in fifth and sixth with Lewis Hamilton and George Russell, however both drivers will be promoted to the second row due to penalties for drivers ahead.

Wolff believes that Mercedes had much more time on the table, but the difficult nature of driving the car restricted the drivers from extracting the pace.

“Third and fourth, I think the update works,” Wolff told Sky F1. “We had a lap in us that was three-tenths quicker, but the car is so tricky to drive.

“So I think for tomorrow, we could be part of some exciting games. Austin was never great for us in the past and here it’s worked well. We’re six-tenths off, could’ve been three.”

The qualifying session from COTA was preceded by the news that Wolff’s compatriot Dietrich Mateschitz had passed away.

The Red Bull co-founder and owner was hailed by Wolff for the impact he had on the business environment.

“Dietrich Mateschitz, for me, is one of the most incredible entrepreneurs in the world,” he said.

“He created a market that didn’t exist in energy drinks out of Salzburg, made one of the best brands in the world.

“We owe him so much in the sport, not only Spielberg but also the two teams [in F1], ice hockey, football, all the actions sports. There’s no one like him. So a sad day for all of us Austrians.”