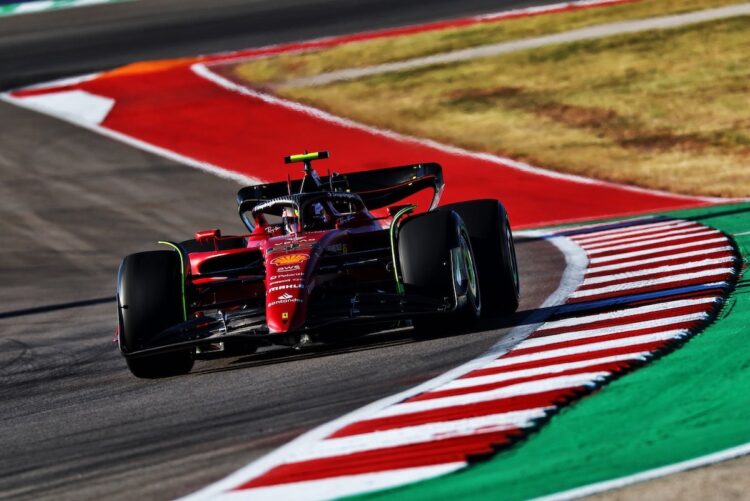 Carlos Sainz will start the United States Grand Prix on pole ahead of Max Verstappen after the Spaniard beat Charles Leclerc to the fastest lap in qualifying.

Leclerc split the two former team-mates in the top three, setting a lap just over half a tenth adrift of Sainz’s 1:34.356, but the Monegasque will be pushed down to 12th on the starting grid owing to a 10-place penalty for taking new parts this weekend.

Sergio Perez qualified fourth in the second Red Bull, and he carries a five-place penalty into Sunday’s race, so will start ninth.

Lewis Hamilton and George Russell made a provision all-Mercedes front row, before the two penalties in front of them are applied.

Lance Stroll finished an impressive seventh ahead of Lando Norris, with Fernando Alonso and Valtteri Bottas rounding out the top 10 – the Spaniard too has a five-place penalty.

Alex Albon qualified 11th as a result of Zhou Guanyu’s lap time deletion on his final Q2 run, while Sebastian Vettel wound up 12th, ahead of Pierre Gasly, who encountered more brake troubles on Saturday.

Zhou’s final run in the second phase of qualifying had initially been good enough to push Norris into the drop zone, but he was pegged back to 14th ahead of the other AlphaTauri of Yuki Tsunoda.

The young Chinese driver took a new Internal Combustion Engine (ICE) ahead of the weekend, so will line up 19th on the grid for the race.

Kevin Magnussen was dumped out in Q1 after Albon’s fine display, while Daniel Ricciardo was eliminated in Q1 for the third time in five races as he ended up 17th.

Esteban Ocon was a shock exit in the opening phase, qualifying ahead only of Mick Schumacher, who went for a brief spin at Turn 1, and Nicholas Latifi.