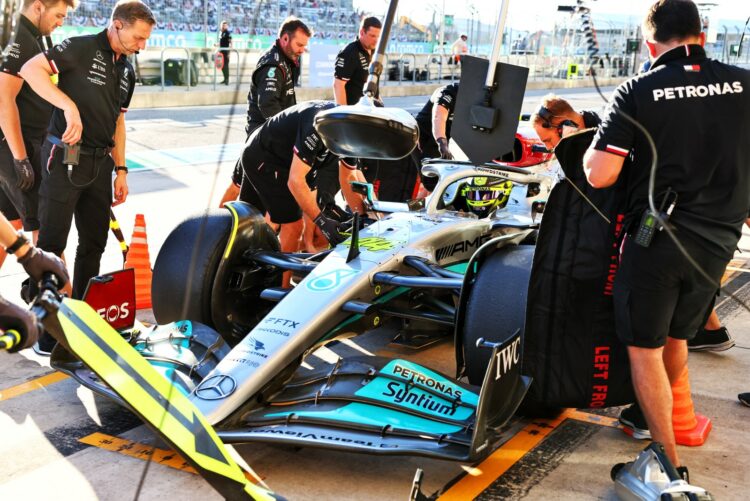 Mercedes has introduced a tweaked floor and refinements to the front and rear wing as it continues to experiment with its W13.

Hamilton was third-fastest in the opening session, which was the only practice of relevance due to the second session being dedicated to a 2023 tyre test.

“Everything went to plan,” said Hamilton. “I kept the car in one piece today – just about – which is good. And definitely felt improvements in the car.

“Obviously FP2 was a bit of a waste in terms of figuring out performance, but P1 was feeling quite good. I’m hoping we make some changes tonight and we’ll find out exactly where we stand. But it doesn’t feel like we are too far away.”

Team-mate George Russell added that “I think they worked okay to be honest.

“There were a few teams who were looking very fast that were unexpectedly. Some other teams that were not as quick as we would have thought and obviously, having semi-missed FP2 because we were all running our own programmes.

“We don’t really know what the pecking order is. So far the car is feeling quite strong which is promising. I think you always get an inkling early on in the day if it’s going to be a good weekend or a tough weekend. We’re mid way. It feels like it’s definitely not the worst the car has been.

“As I said, we don’t know what Red Bull and Ferrari are doing when they turn it up tomorrow.”