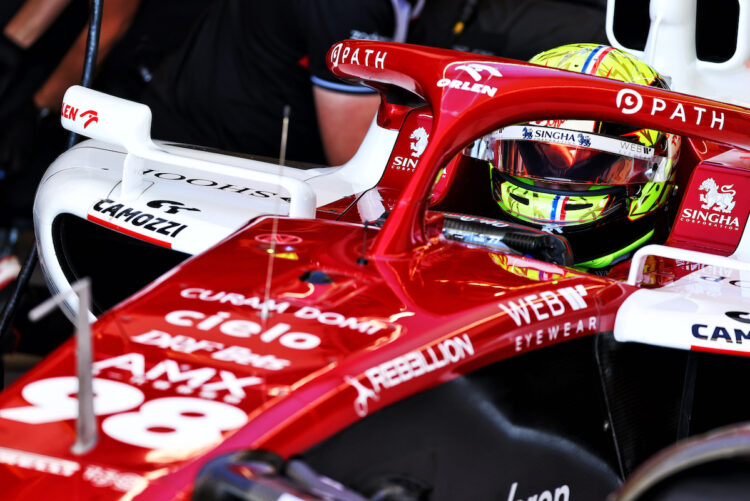 Theo Pourchaire has described his free practice outing with Alfa Romeo in the USA as the “best hour of my life”.

Pourchaire replaced Valtteri Bottas for the session, fulfilling one of two mandatory rookie outings that teams must provide in 2022.

The Frenchman, who is currently competing in Formula 2, has been linked with a future F1 drive for some time.

Pourchaire previously tested for Alfa Romeo in Budapest last year driving an old-spec car, but received the opportunity to handle up-to-date machinery during his maiden FP1 session at COTA.

He ended the outing in 18th, clocking 18 laps for the team.

“It was amazing,” he said. “The best hour of my life. It’s an amazing track, I was discovering this track and the car as well. Woah.

“A lot of emotions right now, I’m so, so happy. I’m happy to help the team as well, they did some tests. It’s all good, everyone is happy, so it’s a good start to the weekend.”

Pourchaire admits that his outing wasn’t error-free as he attempted to learn the jump from F2 to F1.

“It was a good session, we did quite a lot of laps,” he said. “There was a red flag [following Antonio Giovinazzi’s crash] at the beginning so it compromised us, a bit, at the start of the session.

“But all good, good laps. I did some mistakes I tried to push the limits and understand some things.

“All the settings on the steering wheel, I come from F2, it’s a lot different. But it’s good experience for the future.”

Pourchaire will contest the final round of the F2 season next month from Abu Dhabi. He currently sits second in the Drivers’ Championship.