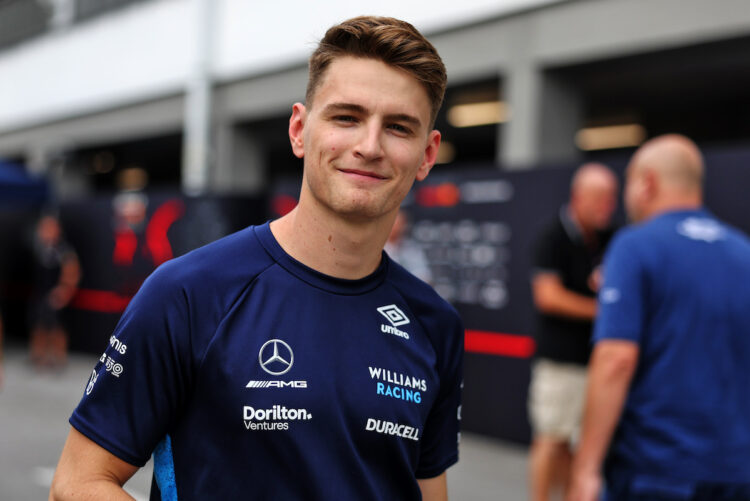 Mark Webber believes that Logan Sargeant’s nationality will aid his push to be on the Formula 1 grid in 2023.

The American driver is currently a front-runner to take the vacant seat at Williams when Nicholas Latifi departs the team at the end of the year.

Sargeant currently competes full-time in Formula 2, but still needs to secure a Super Licence, which he can do at the season finale in Abu Dhabi next month.

The 21-year-old will make his FP1 debut with Williams this weekend at his home event in Austin, Texas.

F1 has not seen an American driver since 2015, when Alexander Rossi drove five races for the now-defunct Manor Marussia team.

However, F1 is currently rocketing in popularity in the US, with the sport scheduled to visit the country three times next year.

Williams and Haas are the only teams left to confirm their 2023 line-ups, and when asked by Channel 4 who he thinks will slot in at Williams, Webber said: “I think Logan Sargeant.

“He’s in Formula 2 this year, he might need a bit of introducing to our fans at home. In general, I think he’s the favourite – American, Liberty [Media, F1’s owner] they are pretty keen on him.

“But there’s some Super Licence challenges around him in terms of points, championship position, in Abu Dhabi.”

Gasly departs the Red Bull stable after a number of years under its umbrella, and Webber has backed the Frenchman to “flourish” in his new environment.

“I like Pierre, he’s a good young lad,” Webber said. “He’s been at Red Bull for a long time, he could flourish in a new environment.

“Obviously this is a French brand and Pierre locally will be great for them. So I think he could be a cracking little signing.”

As for Webber’s compatriot Daniel Ricciardo, a reserve driver role at Mercedes appears to be the most likely option for 2023 when he leaves McLaren at the conclusion of the current campaign.

“A Merc reserve driver role, who knows how long Lewis [Hamilton] will go on for, so Daniel of course has got decisions [to make],” said Webber.

“And Merc, a pretty handy operation, so it’s something he might consider.”