by Rob Kershaw
A A
5 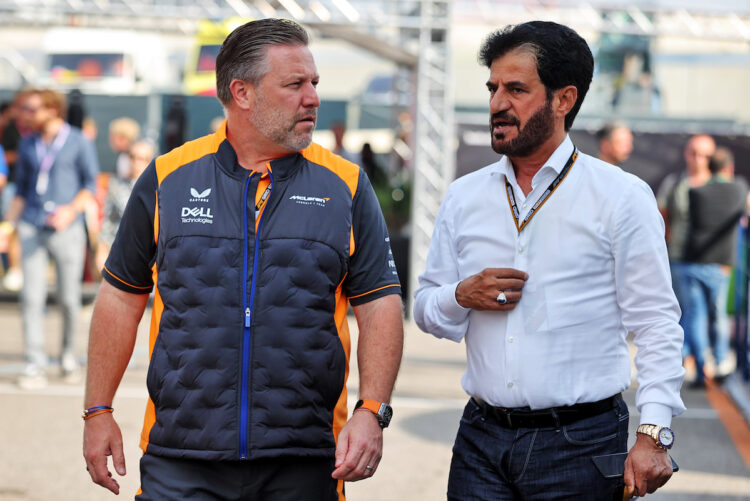 McLaren CEO Zak Brown is reported to have sent a letter to the FIA in which he has called for a penalty that is more severe than a fine for teams that exceeded Formula 1’s budget cap.

The FIA has been reviewing the expenditures of all of the teams over the past few months, and it recently confirmed that it found Red Bull and Aston Martin in breach of last year’s cap of $145 million.

While initial rumours claimed that the Austrian team had overspent by more than five per cent – which would constitute a material breach – it has been confirmed to be within a minor breach.

This means to say that they have spent no more than $152.25m, but shortly after Christian Horner’s team were found in breach, it published a statement refuting any contravention of the financial regulations.

Aston Martin, meanwhile, was found in procedural breach, and the British side has not yet released a public comment regarding the findings. The FIA has not specified exactly what Aston Martin is guilty of, but it is thought to be related to paperwork.

Earlier this year, Williams was fined $25,000 after it submitted their files after the deadline had passed.

The governing body is currently deciding on a suitable punishment for both teams, taking into account any mitigating factors, but no timeline has yet been set for a decision.

It should be noted that Brown made no mention of either team in his letter, obtained by the BBC.

However, the American implied that Red Bull might have gained a “significant advantage” as a result of their alleged transgression.

“The overspend breach, and possibly the procedural breaches, constitute cheating by offering a significant advantage across technical, sporting and financial regulations,” wrote Brown.

“The FIA has run an extremely thorough, collaborative and open process. We have even been given a one-year dress rehearsal (in 2020), with ample opportunity to seek any clarification if details were unclear. So, there is no reason for any team to now say they are surprised.

“The bottom line is any team who has overspent has gained an unfair advantage both in the current and following year’s car development.

“We don’t feel a financial penalty alone would be a suitable penalty for an overspend breach or a serious procedural breach. There clearly needs to be a sporting penalty in these instances, as determined by the FIA.

“We suggest that the overspend should be penalised by way of a reduction to the team’s cost cap in the year following the ruling, and the penalty should be equal to the overspend plus a further fine – i.e. an overspend of $2m in 2021, which is identified in 2022, would result in a $4m deduction in 2023.

“For context, $2m is [a] 25-50% upgrade to [an] annual car-development budget and hence would have a significant positive and long-lasting benefit.

“In addition, we believe there should be minor overspend sporting penalties of a 20% reduction in CFD and wind tunnel time.

“These should be enforced in the following year, to mitigate against the unfair advantage the team has and will continue to benefit from.”