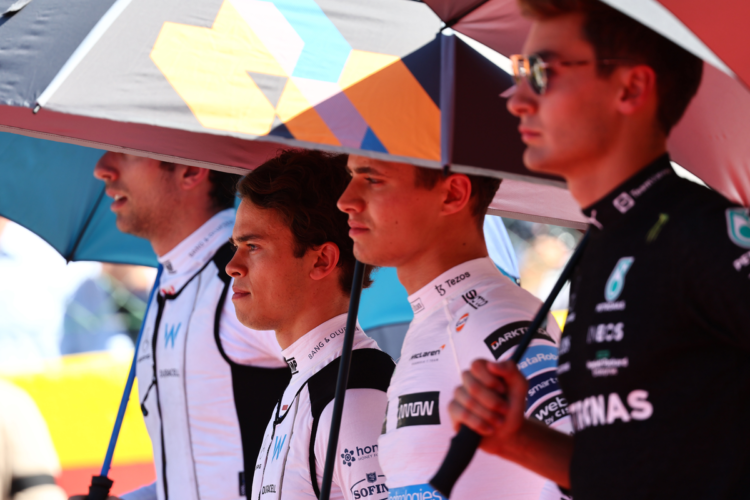 After the announcement of Nyck de Vries replacing the outbound Pierre Gasly at AlphaTauri, the new partnership of de Vries and Yuki Tsunoda is set to break a Formula 1 record.

That is, of course, the shortest-ever F1 driver line-up.

According to Sky Sports F1’s Ted Kravitz, next year’s AlphaTauri line-up will measure shorter than the previous records line-up of Anthony Davidson and Takuma Sato who raced for Super Aguri in the opening four rounds of the 2008 season.

With Davidson and Sato measuring up at 166cm and 164cm respectively, their average height of 165cm looms over de Vries and Tsunoda’s average of 163cm after measuring the Dutchman at 167cm and the Japanese driver at 159cm.

Tsunoda sits at the bottom of the current F1 drivers’ height standings with Williams’ Alex Albon and Alpine’s Esteban Ocon joint-tallest at 186cm.

De Vries was finally given a full-time drive in F1 after his FIA Formula 2 championship win in 2019 with ART Grand Prix. He has since raced in Formula E with Mercedes-EQ where he won the 2021 Drivers’ Championship.

As well as his full-time commitments in Formula E, de Vries has been a part of the Mercedes F1 set-up since 2020 when he took part in the post-season Young Driver test. He then joined the team as a reserve driver alongside Formula E team-mate Stoffel Vandoorne in 2021.

De Vries was delighted at securing a seat in F1 for 2023, saying: “I’m extremely excited to be joining Scuderia AlphaTauri for 2023 and I want to thank both Red Bull and the team for giving me the opportunity to drive in F1.

“After Formula 2, I took a slightly different path with motorsport, but F1 has always been my dream and I’m grateful to be able to fulfil it.

“I’ve had a lot of chances to experience the 2022 car this year and I think that has put me in a great position for the upcoming season. I hope this has helped to prepare me for what is to come.”