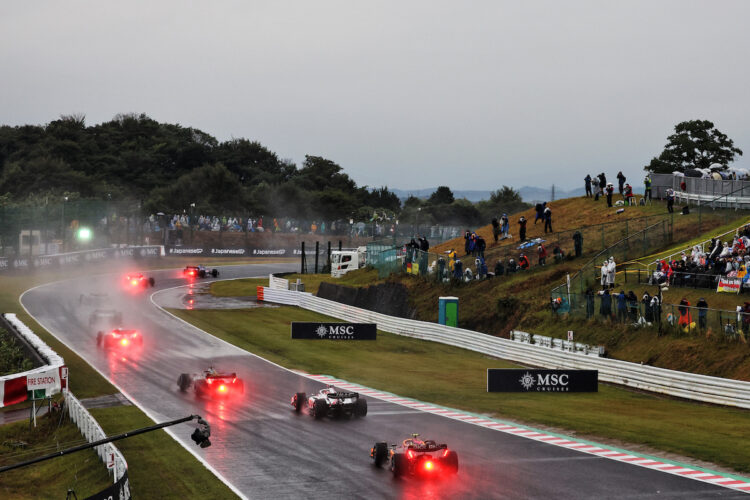 1997 Formula 1 World Champion Jacques Villeneuve has called on the Suzuka Circuit to make safety improvements to one of its corners following Carlos Sainz’s crash last Sunday.

The Ferrari driver was eliminated on the opening lap of the race after spinning off in wet conditions.

Sainz lost control of his car on the run up to the Spoon Curve, bounced off the barrier and rebounded back onto the track where he was narrowly missed by several of his rivals.

Villeneuve has suggested that changes should be made to the section to improve safety for the drivers.

“A word about Carlos Sainz’s crash: I have always found that kink dangerous, ever since I raced there in F3,” Villeneuve wrote in his column for Formule1.net.

“In dry weather it’s like a straight, easy full throttle. But in rain it becomes tricky, it’s a small kink with a tyre wall on the outside with billboards.

“An impact with a guardrail or wall would be better than this option, the car spins and slides on and that would be fine. Sainz was not going that fast at all but driving on ice, so to speak.”

A tractor then ventured onto the track to recover Sainz’s stricken car, which caused outrage from other drivers due to the low visibility.

Pierre Gasly asserted that he could’ve been killed had be made contact with the vehicle, and Villeneuve says that he understands the frustration from the drivers.

“I totally understood the fuss about the trucks on the track when Pierre Gasly had yet to pass,” he said.

“Strictly speaking it is allowed by the rules, after all the race was neutralized. In dry weather nobody would care, in rain it is a different story. Then this really should never happen.

“You can’t always see where you are, there may be cars driving around with damage to suspension, brakes or a flat tyre.

“Even at low speed, a collision with such a vehicle is very dangerous. Emotions ran so high I thought was only logical given the past with Jules Bianchi.”