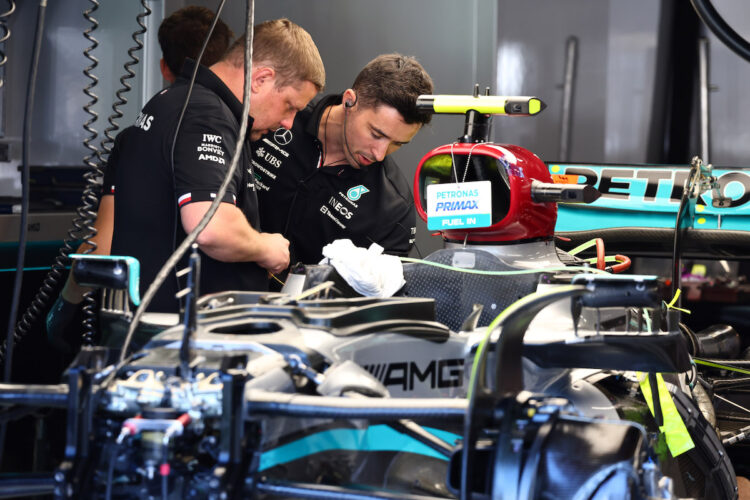 Mercedes will arrive at the Circuit of the Americas in Austin, Texas with its final upgraded aerodynamic parts of the year.

The US Grand Prix takes place next week, kicking off a trio of rounds in the Americas before the season finale in Abu Dhabi.

Mercedes, who was a dominant force in the turbo-hybrid era before 2022, has struggled this year with its package and is yet to take a race win with the W13 car.

Its final upgrades of the year will be showcased next week, as it looks to carry as much information into 2023 as it can.

“It’s our final step of aero development and that will hopefully give us a bit more performance but importantly with every step, we are learning more and more and that learning we can carry into next year,” said Andrew Shovlin, Mercedes’ Trackside Engineering Director

“So that’s part of it, also there is a few bits where we have taken some weight out of components that will hopefully get the car closer to the weight limit.

“It’s very difficult for us to predict where we are going to be. In Singapore Lewis was awfully close to pole position, yet in Suzuka both cars had a big gap to the front.

“Now, our race pace has been reasonably strong, so, if we can make a step hopefully, we can get into the fight with the Ferraris and the Red Bulls but qualifying for us is the really difficult one to predict at the moment.

“But as I said a lot of it is about learning and we are certainly going to give it our best shot in the final four races.”

COTA has resurfaced its track following criticism at last year’s event, with drivers complaining of the severity of bumps around the circuit.

Although Mercedes is hopeful of a smoother ride for its drivers this time around, it remains coy over where it will place in the order at the US Grand Prix.

“They have done some resurfacing so hopefully those issues with the bumps are a bit less but what’s very hard this year is to really know where you are going to be on the circuit before you’ve gone there and as I said in a previous answer, a lot of it is about learning.

“We will not really be going to make any predictions about where we are going to perform, we just need to go there on Friday, see what kind of issues we have and then see whether we can solve those with setup.”