Norris: People expected Ricciardo bond to be ‘another level’ 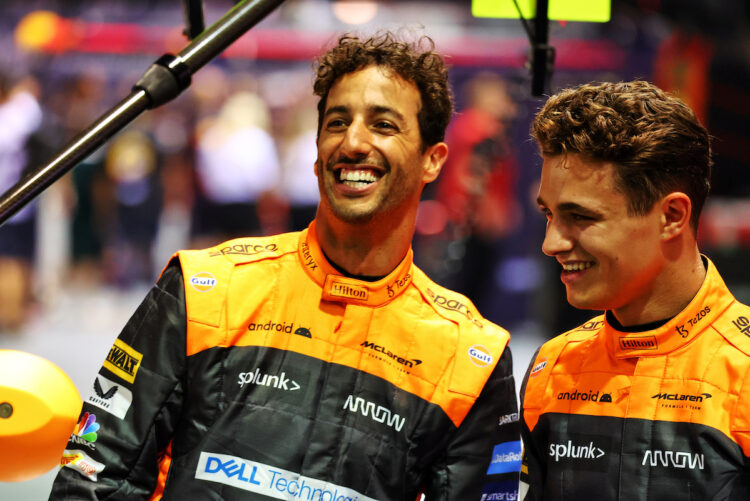 Lando Norris has shot down rumours of unrest at McLaren between himself and Daniel Ricciardo, citing that the expectations by fans of their friendship as team-mates were too high before it had even begun.

Before his move to Ferrari for 2021 which opened the door to Ricciardo joining McLaren, Carlos Sainz and Norris shared two seasons together as they took the British racing outfit to third in the Constructors’ Championship in 2020.

Whilst Formula 1 team-mates aren’t usually the best of friends, the relationship between the Spaniard and Brit was very close with Norris stating: “I still get on really well with Carlos, he’s probably one of my best mates within the paddock.”

“In terms of seeing F1 drivers be friends or team-mates be friends, I set the bar quite high with that,” Norris continued. “Then people expected Daniel – a very funny guy, and me – similar in many ways, to just be like another level. And it wasn’t.

“A little bit of the competition side of it, Daniel being experienced, me being still a relatively new guy and people just wanted to try and bash our heads together and try and make it look like it really wasn’t anything great.”

Norris explained that Ricciardo’s presence as a more experienced driver added more competition to the garage as he headed into his third and fourth seasons in F1 as opposed to joining as a rookie next to Sainz.

“Maybe it started off not as comfortable as what me and Carlos did because he welcomed me into the team with open arms like he’s the guy with experience in Formula 1.

“I guess it’s a little bit different when Daniel came into the team because he was coming in as the big driver again with a lot of experience but I was already within McLaren.