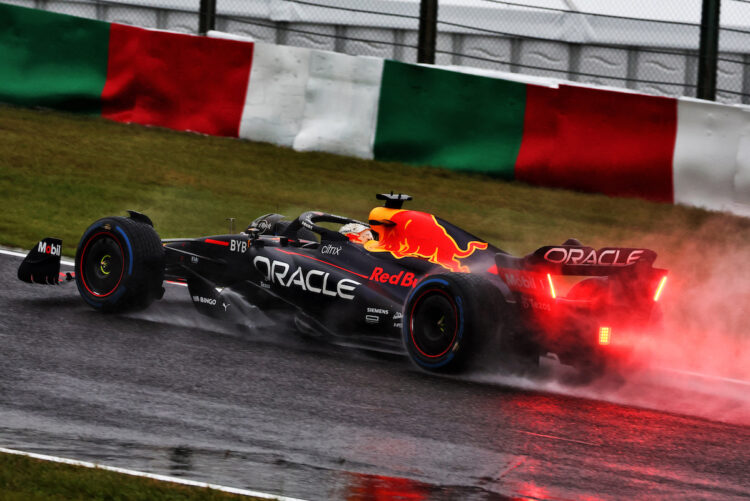 Max Verstappen says that Formula 1 is in need of a more efficient wet weather tyre.

Extreme Wet tyres have been sparsely used over the last couple of years, however they did make an appearance at Sunday’s Japanese Grand Prix.

Following the restart after a lengthy red flag period, the Wet compound was mandated – however just several laps later, most of the field pitted for Intermediates, which offered a significant pace advantage.

Verstappen, who wrapped up his second F1 title on Sunday, states that the current Wet compound isn’t clearing enough water.

“I didn’t want to take a dig out of everyone but I think we need better rain tyres,” he said.“If you saw what we could do in the ‘90s or the early 2000s, with the amount of water on the track.

“We need better rain tyres because I think the extremes are just slow and they can’t really carry a lot of water away.

“That’s why everyone always tries to switch very quickly to an intermediate because it’s just so much faster per lap, like you could see from one to the other lap, we went from the extreme to the inter [in Japan] and we immediately went five seconds at least faster and that is just too big.

“And that’s why nobody really wants to run that extreme. And when it rained like it did when the red flag came out and you would have put extreme tyres on, I think it would still be really difficult to drive.

“But then if you compare that to 20 years ago, that would have been perfectly fine. So there must be a solution.”

Verstappen says that he would be happy to take part in private test days with Pirelli to discover an answer.

“Like I said, this is not criticism because I’m very happy to help out,” he said. We should look into it.

“Maybe we can just organise more tests days in the wet and work together, to try and find better tyres to at least have an opportunity to really drive in the wet and not always only drive like two laps on an extreme, switch to intermediate and call it a wet race because a wet race is also normally driven with heavy rain.”