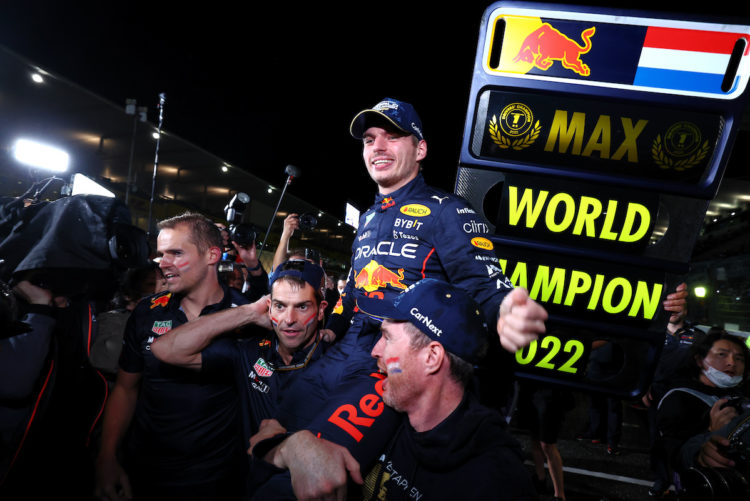 Max Verstappen states that he doesn’t mind the confusing nature of his second Formula 1 title win, claiming he finds the situation “quite funny”.

Verstappen found out that he won the title while being interviewed following his win at the Japanese Grand Prix on Sunday.

His closest rival in the standings Charles Leclerc was handed a five-second time penalty, demoting him to third place behind Verstappen’s Red Bull team-mate Sergio Perez.

The penalty, coupled with the allocation of full points despite the shortened race distance, meant that Verstappen achieved an insurmountable lead in the Drivers’ Championship.

Verstappen celebrated the title with his team after being informed, but was still unsure of the situation in the cool-down room before the podium ceremony.

Speaking about how the events unfolded, Verstappen said: “To be honest, I don’t mind that it was a little bit confusing, I find it actually quite funny.

“Because at the end of the day, it’s not going to change, right? The result? I mean, when I crossed the line, it was anyway, not enough, even if you would give full points.

“So, in that scenario, you know, wouldn’t have changed anything.”

The FIA awarded full points for the race in Suzuka as the race resumed following a red flag, which Verstappen labelled as a complicated scenario.

“These are really complex situations with the weather, the amount of laps,” he said.

“And then, of course, there’s a difference between if you finish the race or the race gets red flagged early on and then you can’t continue.

And there is a difference between the two. So yeah, I do think that if you don’t write enough rules, it’s not good. If you write too many rules, also not good. It’s always really hard to find a middle ground, I think.”