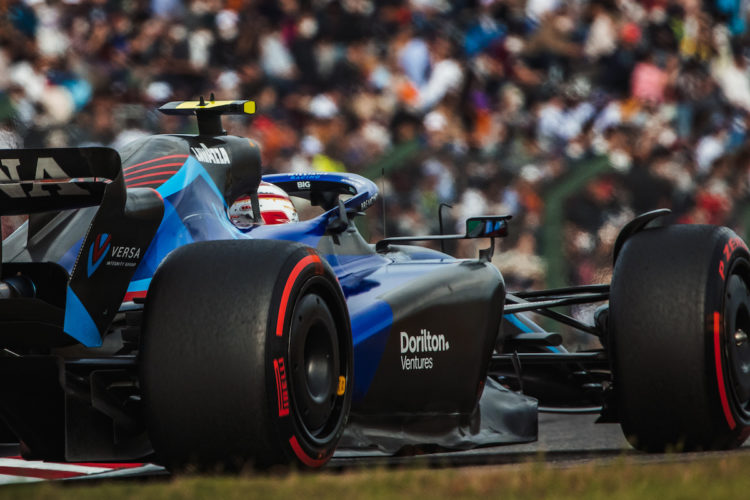 Nicholas Latifi has revealed what led to his mistake during Friday practice at Suzuka, when he took a wrong turn in a bizarre incident.

As he approached the final chicane at low speed, Latifi was changing settings on his steering wheel before he turned right too early and onto a piece of tarmac that isn’t part of the grand prix circuit layout.

A team radio was broadcast in which he claimed there was something wrong with the car – however Latifi says that the message was delayed and unrelated to his mistake.

“The radio was a bit delayed from what was shown on TV when I was saying it was a bit strange there,” Latifi said.

“It was totally my fault, but I was getting some calls from my engineer.

“We were supposed to do another lap, but then we got a last-minute call to box, so I was changing something on my steering wheel, I was looking down, and when I looked up, I saw the turn which is obviously not the right turn.”

Latifi says that he was still coming to grips with the track as drivers had limited running during the day due to adverse weather conditions.

“Not having had the proper laps yet, I was still getting my bearings around the track, he said.

“I turned, and then basically because it wasn’t the right turn, which I didn’t realise right away, it’s a sharper turn, the car just kept understeering and kept going straight.

“I came on the radio right away and said ‘ooh, what’s going on there’.

“Then I realised OK, this is the wrong turn and a much slower turn, that’s why!

“I think the fact the car didn’t fully turn around, at some point it was spinning and then it just understeered straight. It was my mistake, just a funny one. The radio message is a bit skewed.”

Latifi added he was teased by his trainer, but laughed off the incident: “No harm, no foul!”

The Canadian driver will depart Williams at the end of the 2022 campaign after three seasons with the team.