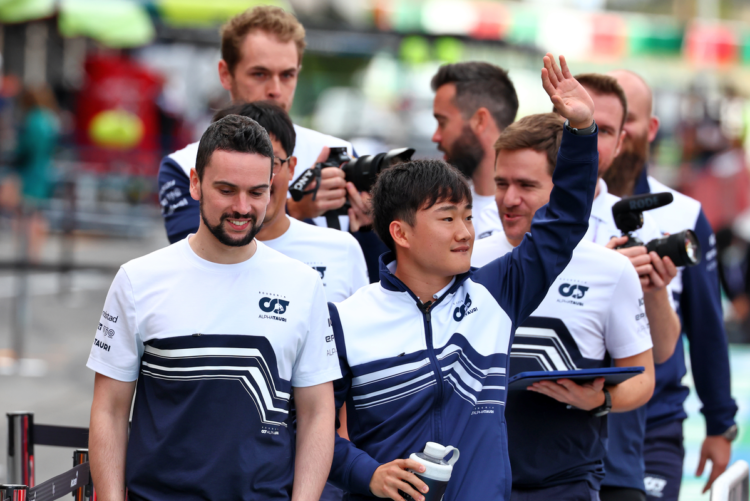 Yuki Tsunoda asserts that he isn’t feeling any additional pressure at his first home Formula 1 race weekend in Japan.

Due to the cancellation of the 2021 Japanese Grand Prix in response to the COVID-19 pandemic, Tsunoda missed out on the opportunity of a home race in his rookie season of F1.

With the most recent instalment of the grand prix being back in 2019 which was won by Valtteri Bottas, the added excitement from the fans of a return to Suzuka three years later is all the more motivation for Tsunoda.

When asked if he was feeling the pressure from the local fans to perform well, the Japanese driver replied: “Currently, I don’t feel like getting pressure because it’s really hard to imagine I’m driving here. Just four years ago I was one of the spectators watching these guys, you know?

“And now I’m driving in front of them, the Japanese fans. It’s just really hard to imagine but it definitely is a cool thing. I didn’t expect that to be honest; there’s like huge pictures at the grandstand. It feels very supportive and gives me extra energy for that.”

The last time he raced at the track in a registered race was during the 2018 Japanese Formula 4 championship where he was part of the Honda Formula Dream Project.

The resulting win of that year’s championship was a big part of Tsunoda’s path to eventually becoming an F1 driver.

“Yeah, I drove a Formula 4 car, I think it was four years ago,” he added. “In the simulator, I felt like a lot of things going on fast, much faster than when I used to drive. So, I really like Suzuka, like I said, I was driving here since from 2016.

“I have driven more than 10,000 laps or whatever here, so I’ve learned a lot of tricks. It’s a lot different when I drive a Formula 1 car. So, I need a good build-up but still, I think it is one of the best tracks in my experience.”