Horner: Mercedes ‘definitely in the mix’ in Japan 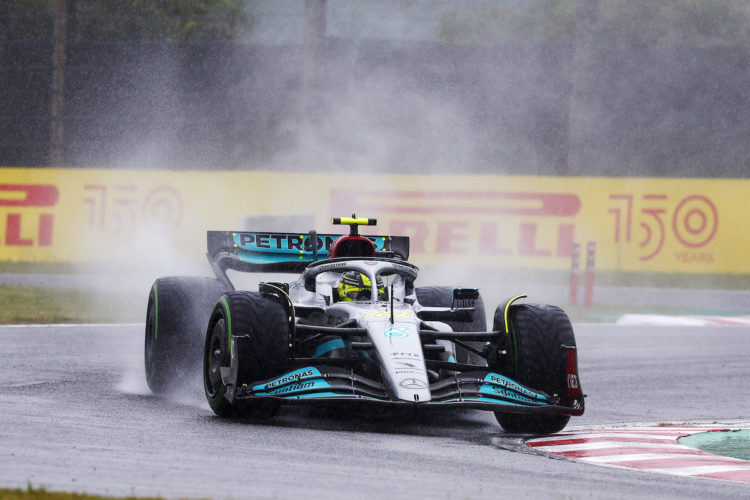 Christian Horner believes that the Mercedes Formula 1 team are “definitely in the mix” after their strong showing during Friday practice in Japan.

Despite taking a number of podium results in 2022, Mercedes is yet to achieve a race win, with its drought extending back to last year’s Saudi Arabian Grand Prix.

Mercedes looked comfortable in wet conditions – however it used up more of its wet weather tyre allocation during the session than Red Bull.

Nevertheless, Horner hasn’t counted out the Brackley-based squad for Sunday’s race as more rain is forecast.

“I think it will be interesting,” he told Sky F1. “Definitely taking those extra sets of tyres… particularly in the first sector there’s a big advantage on a new set here.

“I think Ferrari are perhaps out of position as well. I think the whole thing will concertina a bit.”

Red Bull enters the weekend with the hope of sealing the Drivers’ Championship, with Max Verstappen poised for his second consecutive title.

However, the situation comes amid speculation from rival teams that Red Bull breached last year’s cost cap – which is set to be clarified on Monday.

Horner remains content that Red Bull didn’t operate illegally in 2021, and asserts its full focus is on the Japanese GP weekend.

“We await with interest to see what happens on Monday,” he said.

“Again, we feel that we’ve absolutely complied with the cost cap, with the regulations, happy with our submission and awaiting to hear what the feedback is.

“It’s a big weekend for Max. It’s a possibility rather than a probability but it’s another match point effectively for him.

“That’s what we’re focused on. The amount of noise that’s been around other topics, one can only think it’s designed to be a bit of a distraction.

“We’re very happy with where we are, with where our submission for the cap is and all focus is on this weekend.”