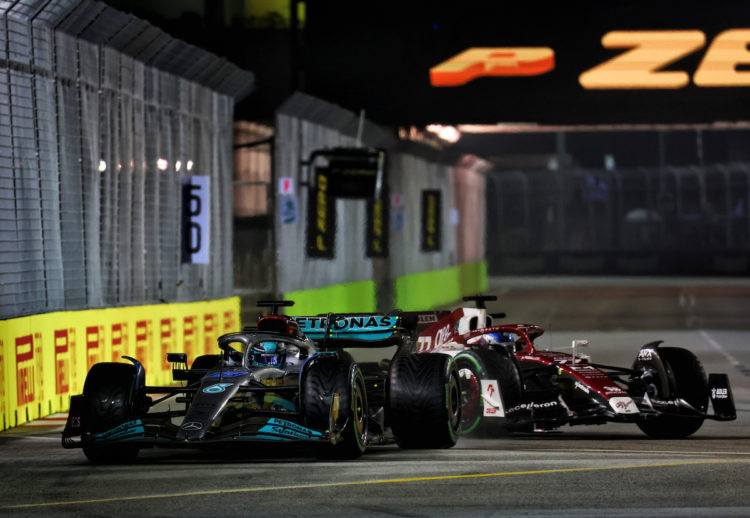 Russell endured a difficult race for Mercedes and was involved in multiple incidents on the circuit.

One particular episode involved Bottas, when Russell attempted to overtake the Alfa Romeo driver into Turn 7.

However, the track off the racing line was still damp due to rainfall earlier in the evening, and Russell went straight on at the corner, making slight contact with Bottas.

Bottas and Russell famously came together at Imola last year in a high-speed incident that saw immediate tension between the pair.

However, on this occasion, the drivers escaped without major damage, with Bottas insisting there was nothing malicious about the manoeuvre.

“I think it was just a racing incident,” he said. “He committed to the overtake but it was still damp in that line, so he locked up.

“Luckily there was no bad damage, maybe if we touched at a different angle, I could have lost the front wing or a wheel, so luckily nothing happened there.

“But of course I enjoyed defending the position and keeping him behind.”

Alfa Romeo failed to score points in Singapore, while rivals Aston Martin took a strong haul, decreasing the gap to 15 points between the two teams in the fight for sixth in the Constructors’ standings.

“It is always disappointing not to score when there are opportunities,” Bottas reflected.

“On the other end we didn’t really make mistakes, we did the right calls but I was unlucky that the Safety Car only came one lap after I pitted for slicks, we couldn’t know it would come one lap later and some people benefited from that.

“Otherwise, with a better qualifying, for sure we could have been in the points.”

Alfa Romeo has brought a new front wing to Japan in a bid to increase its downforce output and aid its performance.

The team has scored just one point in the last eight races, with Bottas last finishing in the points at the Canadian Grand Prix in June.

“Hopefully it [the wing] gives us a bit more downforce, mainly, which will help us in the high-speed corners, which is where we’ve been lacking a little bit,” he said.

“In this track, if it works, then we’ll see the results.”