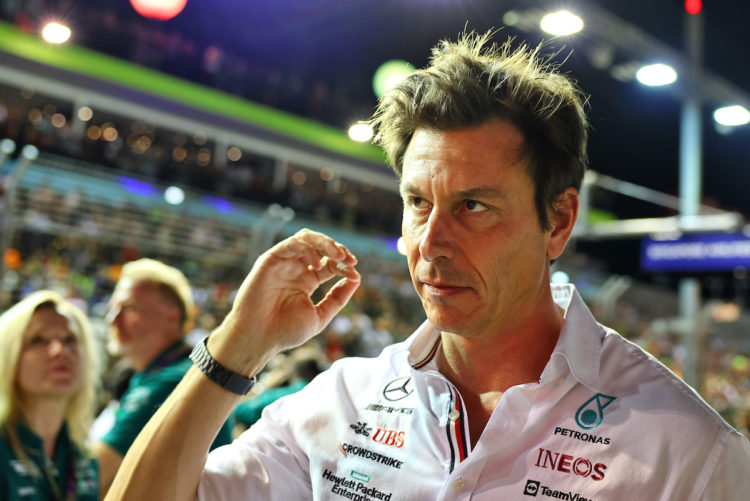 Mercedes team boss Toto Wolff has been branded a “sore loser” amid a row with Red Bull over cost cap breach allegations.

Red Bull was named in a report as one of two F1 teams that have breached 2021’s $145 million budget cap.

Wolff stated that illegal spending would be a “heavyweight” matter, but Red Bull has asserted that it was compliant with the financial regulations.

Red Bull boss Christian Horner even threatened that it could take legal action over the comments, believing them to be defamatory.

Speaking to Sky Sports Germany, Schumacher hit out at Wolff for his comments regarding Red Bull, suggesting the dramatic 2021 season finale in which Max Verstappen won the title is still weighing on his mind.

“No matter what comes out: for me, Toto Wolff, with his harsh criticism, is rather the sore loser who has not yet digested the fact that he lost the 2021 World Championship,” Schumacher said.

“I think that’s a shame. What is clear, however, is that the cost cap must be adhered to. If that wasn’t the case, then of course there must be a penalty.”

The FIA can hand out a range of penalties for a budget cap breach, spanning from a fine to exclusion from the championship.

Ferrari has warned that the findings of the 2021 accounts is a “vital test” for the budget cap system, with the FIA set to announce the results this week.

“The basic structure has definitely been shaken,” Schumacher said.

“The FIA has to investigate itself, because it must not and cannot happen that something slips out.

“What is happening here is only damaging Formula 1 and only the world governing body itself can be to blame.

“The FIA must be investigated here and possibly punished.”