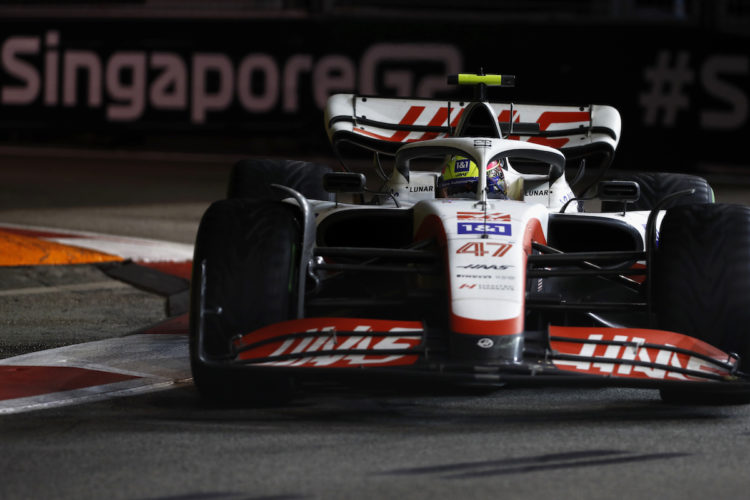 Mercedes’ George Russell declares that he provided Mick Schumacher with enough space to avoid a collision during the Singapore Grand Prix.

On lap 40 of Sunday’s race, Russell attempted to overtake Schumacher on the inside of Turn 1, but the two rubbed tyres and both suffered punctures.

A duo of pit stops killed their chances of scoring points, with Schumacher and Russell crossing the line in 14th and 15th respectively.

The stewards took no further action on the incident, with Russell confident that he wasn’t to blame for the clash.

“Obviously I had the tangle with Mick – I don’t really know what happened there,” Russell said.

“I feel like I left him plenty of space. We would’ve probably finished inside the points because we were flying.”

Russell was the first driver to pit from the field for slick weather tyres, after all drivers commenced the race on Intermediates.

The Briton displayed strong pace during the grand prix after enduring a difficult qualifying session, leaving him pleased that he was able to put his Saturday woes behind him.

“We set the fastest lap at the end by almost two seconds so I’m pleased that the issues from yesterday have been resolved, and I guess a bit of confidence restored that I haven’t lost it and I didn’t qualify three seconds off the pace due to lack of talent or whatever,” he said.

Russell and Schumacher were attached together on more than one occasion during the race, with Schumacher pulling defensive manoeuvrers on the Mercedes driver.

It led to Schumacher commenting over team radio that Schumacher was defending like he was in the race of his life.

However, Schumacher has doubled down on his staunch defense.

“The contact with George was the one that killed our race with the puncture and everything,” he said.

“Nevertheless we finished P13, I think we can say that we’re happy we finished, not a lot of people did. We had the pace for points, we just got unlucky.

“We touched once when we had a battle, I knew he was quicker so it was just a matter of time. But I think in the first battle we had, it was a bit risky.

“I understand him, he wants to go forwards but on the other hand we are all racing for points and our own positions. In that sense, we are fighting for our own race.”