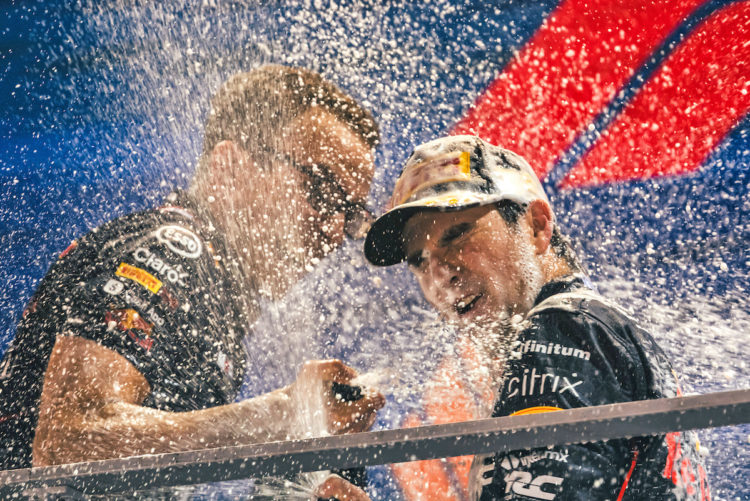 Sergio Perez has taken his second grand prix win of the 2022 Formula 1 season, fending off an attack from Charles Leclerc en route to victory.

The pair battled for position in the final stages of the race, after the drivers had switched from Intermediate tyres to slick compounds.

Perez was investigated post-race for a Safety Car infringement but kept his victory despite a time penalty.

The race start was delayed by just over an hour due to a torrential downpour that occurred in the build-up to the grand prix.

When it got underway, drivers navigated the conditions for the opening half of the grand prix on the Intermediate tyres.

Perez moved ahead of Leclerc on the run to the opening corner, having made a better launch on the slippery track.

There was a handful of retirements in the first half, starting with Zhou Guanyu and Nicholas Latifi who made contact while battling for position, which resulted in a Safety Car – the second Williams of Alexander Albon also retired following a crash into the barrier.

Latifi has been handed a five-place grid penalty for next weekend’s grand prix in Japan.

The two Alpine drivers of Fernando Alonso and Esteban Ocon suffered from mechanical issues, and caused their own Virtual Safety Cars.

George Russell was the first driver to pit for slick tyres on lap 21, and was followed by the rest of the field some 15 laps later, including team-mate Lewis Hamilton who pitted after damaging his front wing following contact with the wall.

A second Safety Car was called when Yuki Tsunoda hit the barriers and dropped out of the race.

At the following restart, Leclerc launched an attack on Perez, but couldn’t pass the Red Bull driver for the lead, who was almost eight seconds in front at the chequered flag.

Carlos Sainz followed home in third place, adding another podium result to his collection in his first visit to Singapore with the Ferrari outfit.

Max Verstappen endured a difficult race, dropping out of the points on the opening lap after starting from eighth place.

Although he recovered a handful of positions, a costly lock-up amid a battle with Lando Norris after the second Safety Car restart sent him back down the order. He ended the race in seventh place.

McLaren scored a strong haul of points in a race where rivals Alpine failed to finish with either of their drivers.

Lando Norris led Daniel Ricciardo across the line in fourth place, while Lance Stroll recorded his best result of the year in sixth place, ahead of team-mate Sebastian Vettel in eighth.

Hamilton ended up in ninth place amid a difficult race, ahead of Pierre Gasly, who took the final point on offer.