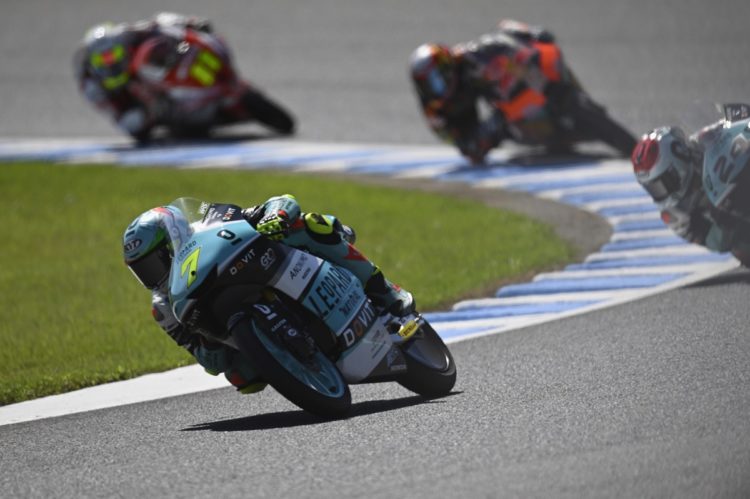 The Leopard Racing rider took control of the contest from pole from the very first laps as he looked nearly untouchable down the two long straights that start a lap of the Buriram International Circuit, the Italian quickly beginning to stretch the field.

Before too long the leading pack compromised of just five riders, with MAX Racing’s Ayumu Sasaki looking to potentially be the only one able to close down Foggia’s advantage in the sweeping corners that ended the lap.

As the race progressed the leading five became a trio as rookie’s Diogo Moreira and David Munoz dropped away, leaving just Sasaki and SIC58’s Ricardo Rossi as Foggia’s only rivals for supremacy.

The relentless Leopard man though was unstoppable and managed to pull out a gap in the closing tours as his two pursuers battled over the runners-up spot, Foggia taking the chequered flag in the end a comfortable 1.5 seconds clear of Sasaki.

The Japanese ace came under pressure in the final bend from Rossi as he fired down the inside on the very last tour to try and snatch second, though he overcooked the entry somewhat and ran wide, allowing Sasaki through and leaving him to instead secure third for his first rostrum result of the year.

Stefano Nepa meanwhile also enjoyed a strong ride to score his best finish of the campaign so far with fourth after coming out on top of a tight scrap for the position, the Angeluss MTA man fending off series lead Guevara to the line after the GasGas man struggled for ultimate pace throughout – though a top five from 11th on the grid at least saw his points gap increase.

This was principally as a result of main title rival Garcia being taken down on the first circulation, the Spaniard being hit at the final bend by Adrian Fernandez who who-sided mid-way through the corner.

Garcia re-joined the race a lap down, though eventually pulled into the pits to retire having gotten involved with the mid-pack once again, likely putting him in danger of receiving a black flag for unsportsmanlike behaviour like he did back at Misano.

His incident means his points gap to team-mate Guevara has swelled to 56 with only 75 remaining in play, with Foggia having now leapfrogged him to sit 49 markers adrift of Guevara.

Andrea Migno was sixth for Snipers ahead of the fading Moreira and Jaume Masia, the KTM Ajo racer having been part of the lead group early on before losing touch and falling to an eventual finishing spot of eighth.

Munoz fell to ninth after running wide on the final lap while battling for a top five finish, while Ryusei Yamanaka completed the top ten.

Tatsuki Suzuki saw a promising race end at around a quarters-distance after his Leopard Honda broke down while running within the lead pack, while John McPhee’s quest to end his final Moto3 campaign with a podium finish came to an early conclusion after the Scotsman crashed at Turn 5 while endeavouring to recover from a sluggish start.