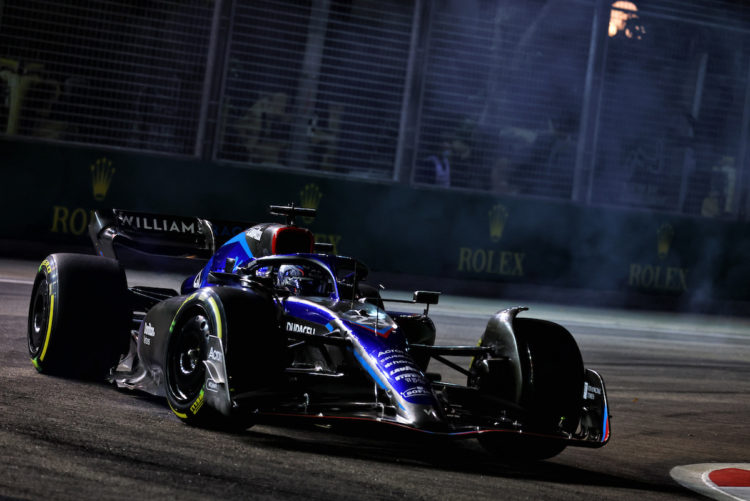 Alexander Albon made his return to the grid this weekend in Singapore, after he was ruled out of the Italian Grand Prix earlier this month.

The Thai-British driver was diagnosed with appendicitis in Italy and underwent a surgical procedure, but suffered complications with his recovery that led to respiratory failure.

After being treated, he returned home to prepare for his comeback, but there were doubts that he would be ready for Singapore.

The Singapore weekend is noted for being one of, if not the most physically demanding race events of the year due to the heat, humidity and length of the race.

Albon was cleared to compete by the FIA doctors when he arrived in Singapore, and after Friday practice, Albon said he was “just OK”, suggesting that he is not back to 100 per cent fitness.

However, the Williams driver admits that he is dealing with the difficulties better than he expected.

“I’m OK. I’ll leave it at just OK,” he said. “It feels hot out there, I think that’s normal. I knew it was going to be difficult. But I feel like I’m coping better than expected. Of course, we had a good amount of long runs.

“It’s still a quarter of what we’ll be doing on Sunday but I’ve still got a day to rest tomorrow. Of course, just being one race and one block of driving, it should not be too bad.

“It feels OK when I’m in the car, generally speaking. It’s more just the heat, when you get out and can you feel that it’s physical. But I feel like there’s no big issue, so I feel pretty good.”

However, Williams expected to endure a more difficult race weekend in Singapore, which benefits high-downforce – an area that the team has struggled with for the last several F1 seasons.

“It feels like we know where we’re struggling [in Singapore], that’s the main thing,” Albon said. “It feels like the car has a bit more potential in it.

“We knew coming here a little bit more behind than we were at Monza, just because of how the circuit is, it doesn’t tend to go in our favour. This is a very downforce-efficient circuit, you have 22, 23 corners around here. There’s not many places to get that lap time back.

“We’re doing what we can. There’s definitely lap time to be had. Still getting into the rhythm and getting closer to the walls, that’s what it’s about here.”