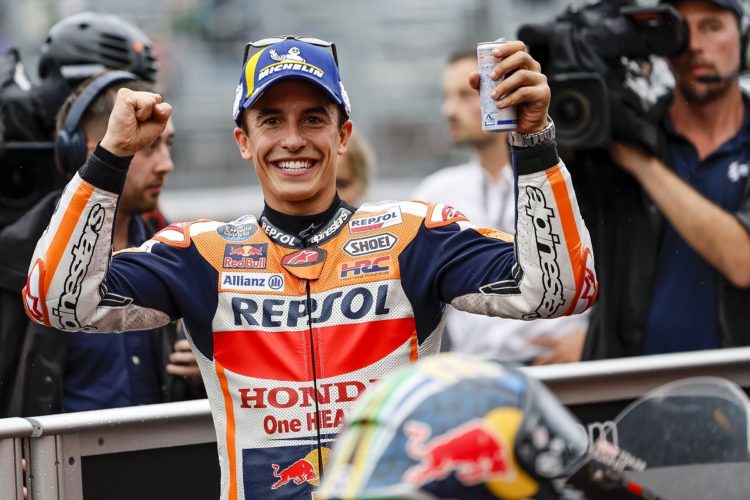 Marc Marquez was left “very happy” after revealing the Japanese Grand Prix was the first time in a long time he didn’t “feel pain” while riding his Honda.

The six-time premier class world champion managed to complete his first full race distance since returning from his latest arm surgery at Motegi, the Spaniard putting in a strong performance from pole to come home fourth despite having expected to struggle to remain up front as a result of his relative lack of race fitness.

His run included a strong end where he managed to put a pass on KTM’s Miguel Oliveira to snatch fourth with a few tours to go, Marquez ending up just 7.7 seconds down from race winner Jack Miller and only 3.5 seconds adrift of third-placed Jorge Martin.

Marquez says he is “very happy with the weekend” bearing in mind he hasn’t completed a full MotoGP encounter since May’s Italian GP, admitting this weekend was the first time in “a long time that I didn’t feel pain in the arm.”

“I’m very happy with the weekend, we did a good weekend here and we didn’t feel the weak points of the bike that much here,” said Marquez.

“The reason for that was because the corners are stop-and-go, and in the race it was tricky because on the first lap we lost a lot because I had some trouble.

“From the second lap everything was OK and then my race really started and I started to feel better, I had a good rhythm in fifth and could see the KTM riders there.

“I didn’t try anything crazy just to finish the race in a good way, as well as to get some kilometres and continue making progress.

“I’m happy personally because it is the first time for a long time that I didn’t feel pain in the arm, I was tired but it was not painful, which is the most important thing.”

The Honda pilot revealed that the reason he dropped from first to fifth on the opening lap of the contest was due to feeling “something strange” with the engine of his RC213-V, though after changing fuel maps the problem was alleviated.

Marquez also felt that his chances of moving forward thereafter were hindered due to overtaking being “tough with this current MotoGP”, adding that he feels you now have to “block-pass and be aggressive” in order to move forwards.

“The reason I went with the soft rear tyre was because I told the team that I wanted to stay up front for the first few laps, but then I felt something strange on the first lap with the bike so I changed some fuel maps and it began working in a good way,” continued Marquez.

“We understand what happened and it was nothing serious, then when I was behind the others with this current MotoGP it is so tough to overtake with all the aerodynamics and the hole-shots so to overtake you have to block-pass and be aggressive, but I didn’t feel ready so I just stayed there and rode in a good way.”