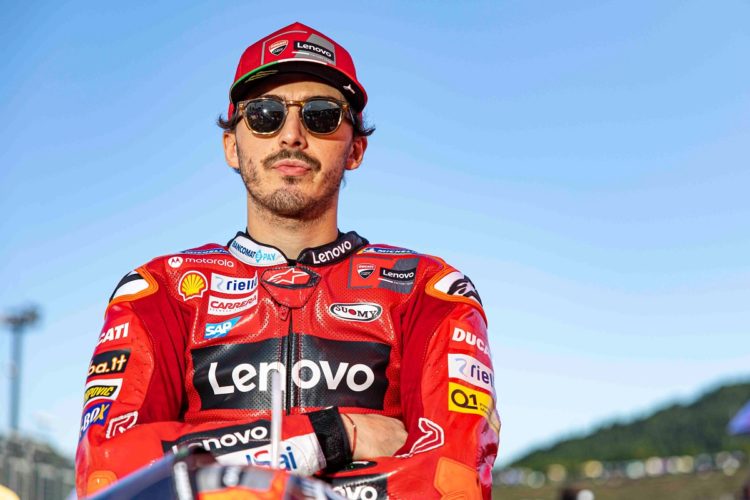 Francesco Bagnaia was left frustrated after he admitted he committed a “stupid manoeuvre” while trying to attack title rival Fabio Quartararo in the Japanese Grand Prix, leading to a crash.

The factory Ducati rider started a lowly 12th after struggling in Saturday’s qualifying session held in wet conditions, though he found it tough to make progress during the bulk of the encounter – the Italian only breaching the top ten in the final third of the race while team-mate Jack Miller cruised away from the field out front.

Bagnaia began to make progress in the closing laps though as he had saved his rubber more effectively than those ahead, first moving clear of Gresini’s Enea Bastianini for ninth before closing onto the rear of eight-placed title rival Quartararo.

The 2018 Moto2 world champion made a half-hearted look at the Yamaha pilot at Turn 3 on the final lap, which put him on a tight line and caused him to lose the front and crash – nearly cleaning out Quartararo and causing him to lose eight crucial points in the championship chase in the process – Bagnaia admitting post-race that he recognised it was a “stupid manoeuvre.”

“First of all I say thanks to my team because my mistake was too huge, I didn’t do a good manoeuvre but fortunately I didn’t touch Fabio (Quartararo) so he was safe and finished the race, I was a bit ambitious,” said Bagnaia.

“We are lucky that Fabio was only eighth and we didn’t lose too many points and that Aleix (Espargaro) didn’t score.

“I have to think about my mistake and try to do the maximum at the next races, I was clapping at myself because I did a stupid manoeuvre.”

Bagnaia explained that a “strange feeling” with his Desmosedici meant he found it difficult to push on and make progress from his lowly starting spot, the Italian struggling with a lack of acceleration from the slow corners as well.

“In any case I had a strange feeling with the bike today, in warm-up everything went well and it was OK but this afternoon I struggled too much,” added Bagnaia.

“I’m glad Jack (Miller) won the race but I have to stay focused for the next race because it will be a good track for us, this is my main objective.

“I was really strong there at Turn 3 under braking but I was too far behind, our acceleration was slow and we lost too much compared to the other bikes which was strange but it is what it is.”

Bagnaia now has an 18-point deficit to overcome across the remaining four events to Quartararo, with Aprilia’s Aleix Espargaro a further seven markers adrift after he also failed to score at Motegi due to his team forgetting to disable the eco engine map for the start of the race, forcing him to start from pit-lane on the wrong tyres en-route to an eventual finishing position of 16th.