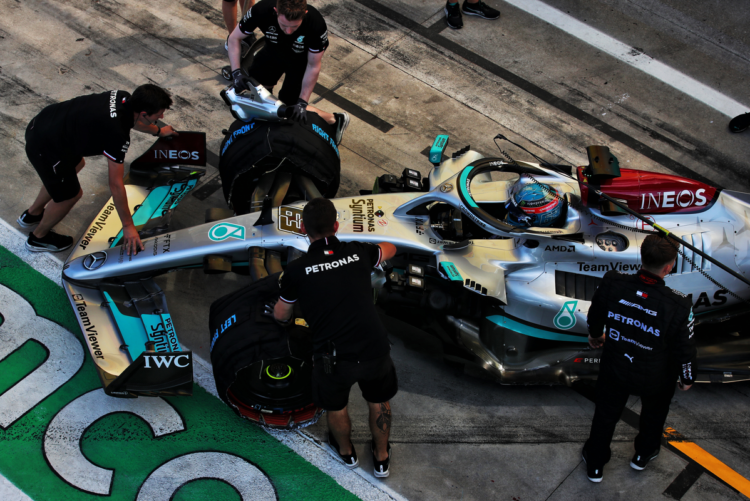 George Russell has set his sights on the United States Grand Prix as being Mercedes’ best chance of winning a Formula 1 race in the 2022 season.

Despite churning out an impressive 13 podiums so far this season, the reigning Constructors’ Champions are yet to appear on the top step at all.

The sidepod-less W13 is known for thriving on high downforce circuits and as the season has progressed, they are slowly closing the gap to the front-runners of Red Bull and Ferrari.

When asked by Formula1.com about which upcoming circuit gives him and Mercedes their best chance of winning at, the Brit replied: “I’d probably say maybe Austin. I think Austin could be a circuit that suits us better – but I truly don’t know.”

“Singapore could be interesting, but historically it’s a circuit where Mercedes have struggled a little bit, and we know at street circuits this year we haven’t fared so well.”

“[I’m] not too sure, there are no standouts that really spring to mind.

If Mercedes do end up failing to win a grand prix this season, it will be the first time since 2011 that the German constructor would have gone through a season completely winless.

For Russell’s team-mate and seven-time world champion Lewis Hamilton, it would be the first winless season of his career.

“I think as a team we’re making a huge amount of progress at the moment and understanding the car more and more,” Russell added.

“Hopefully as we develop the car further, we can take some further gains.”

Mercedes currently sits 35 points behind Ferrari in the Constructors’ Championship, marking the legendary Italian racing outfit as their main rivals for the final six races.

Russell also sits in the middle of a Ferrari sandwich in the Drivers’ Championship. He is currently 16 points ahead of Carlos Sainz Jr. whilst simultaneously sitting 16 points behind Charles Leclerc.