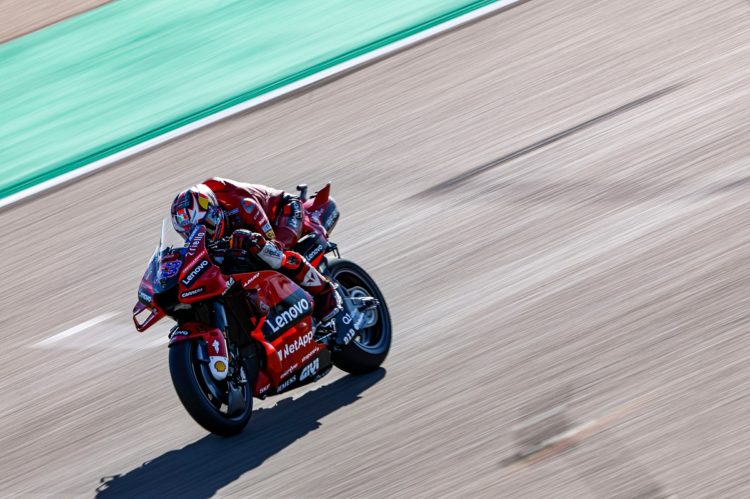 Jack Miller led the way in the first MotoGP practice session at the Mobility Resort Motegi for three years for Ducati ahead of team-mate Francesco Bagnaia.

The extended 75-minute opening test of the weekend – the bumper session created due to the tight turnaround in shipping equipment from Spain to Japan in only a few days – was very much a case of getting re-acquainted with the track for the riders, with laptimes steadily reducing throughout.

The factory Ducati men – as did the bulk of the field – focussed on cycling through each tyre compound across the session in order to gather crucial race data, though Miller and Bagnaia bolted on a fresh set of soft-compound rubber at the end in order to secure a Q2 berth with rain expected to affect running on Saturday.

Miller looked untouchable as he went quickest as the seconds ticked down despite being held up by Suzuki’s Joan Mir replacement Takuya Tsuda with a 1:44.660s, though he managed to find a little more margin on his following tour as he banged in a 1:44.509s.

This would prove to be as fast as anyone would manage with team-mate Bagnaia slotting just in behind the Aussie to the tune of just 0.028s, with series leader Fabio Quartararo ending up third for Yamaha just 0.049s from the peak of the times.

Aleix Espargaro improved late on to snag fourth for Aprilia ahead of VR46 Ducati’s Luca Marini, while Marc Marquez flew the flag for Honda at its own circuit in sixth.

The Spaniard’s countryman and team-mate Pol Espargaro backed him up on the sister factory RC213-V in seventh ahead of KTM twins Brad Binder and Miguel Oliveira, with the top ten and provisional automatic Q2 contenders being rounded off by the other Aprilia of Maverick Vinales- the top ten covered by a slender 0.288s.

A late crash for Johann Zarco ultimately cost him the chance to end Friday within the top ten, the Pramac man slipping to 11th just ahead of LCR Honda’s Takaaki Nakagami who heroically fired in the 12th best effort despite having injured the tendons in the fingers on his right hand just a few days ago in the Aragon Grand Prix.

Enea Bastianini was also left with work to do on Saturday after a heavy crash for the Gresini rider left him in a lowly 14th overnight just behind Suzuki’s Alex Rins.

It looked to be an encouraging day for Franco Morbidelli too as he circulated well within the top five for the majority of the outing, though 16th on the timesheets was the best he could manage when the chips were down just clear of RNF Yamaha pilot Cal Crutchlow – though the pair were only just over half-a-second down on Miller’s benchmark.

Tetsuta Nagashima ended up 22nd overall as he makes his debut premier class appearance wildcarding for Honda, with Suzuki’s Tsuda propping up the table in 25th.