Hamilton: Mercedes’ 2022 F1 slump has ‘encouraged me to stay longer’ 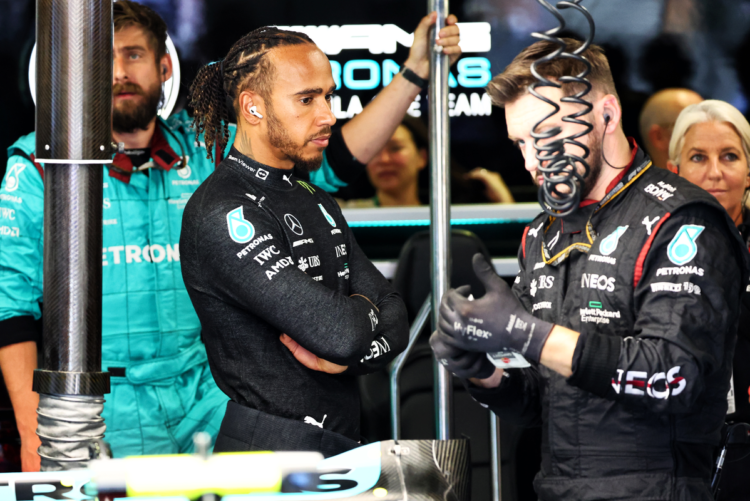 Lewis Hamilton has revealed that the disappointing performance of the Mercedes W13 in the 2022 Formula 1 season has been a deciding factor in why he is continuing to race next season.

Mercedes claimed their eighth consecutive Constructors’ Championship at the end of 2021 but have yet to see themselves on the top step of the podium in 2022.

Coupled with his gut-wrenching end to the 2021 season, Hamilton hinted that if things had turned out differently then he might not have been so motivated to stay for another year.

“I think if we had just won last year and then we would win this year, life would be in a different place and you’d be on a different a different course,” the seven-time champion told racer.com.

“I love that it’s gone through an even harder phase and we’ve got to pull through that thick slog and get to the point where we are a little bit lighter and we’re floating a little bit more. So yeah, I would say that it’s encouraged me to stay longer.

“Plus, I’m feeling fit. I’m finding ways of feeling better physically. The mental challenge is a consistent thing and that will always be the case because that’s how it is for us athletes because we’re on the edge. I like to think I still deserve a place here, and there is lots of work to do.”

The W13 has shown glimpses of improvements throughout the season with George Russell’s pole position in Budapest being a highlight.

The team have also secured 13 podiums throughout the year but have lacked the pace to compete with the main front-runners of Red Bull and Ferrari.

When asked if it hurts to not be fighting for the win as he has been for most of his career, Hamilton replied: “I wouldn’t say it hurts. We all know what it could be.

“We would love to be in that battle fighting, I wish that all the cars were a lot closer and we were all having a much better battle closer to the front.

“I’m hoping when we come back in February next year, the car touches the ground and it does what we hope it does.”