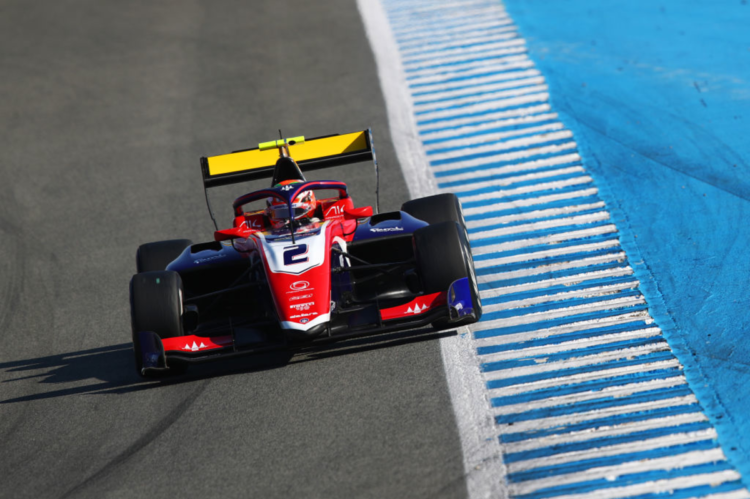 Gabriel Bortoleto was quickest on the second day of Formula 3’s post-season tests, with the Trident driver clocking a time which was nearly half a second faster than anybody else.

Like the opening day which saw Mini on top, Bortoleto set the fastest time of the day in the morning session with Josep Maria Marti the fastest driver in the afternoon.

As the 30 drivers took to Circuito de Jerez in the morning, it was Zak O’Sullivan who set the first benchmark in the opening half an hour before Bortoleto broke into the 1:29’s to go quickest.

Marti was hot behind in the Campos Racing car putting in a good lap to put himself into second where he would stay for the remainder of the session.

Two red flags were brought out in the morning, with the first one due to Taylor Barnard leaving the track at turn 10 after an hour of running. The second red flag was at the hands of ART Grand Prix’s Roberto Faria who went off at turn eight.

Christian Mansell got the afternoon session underway by putting himself in the number one spot after the first 30 minutes. The times in the afternoon were around two to three seconds slower than those being set in the morning.

Hugh Barter made it a Campos Racing one-two before Barnard brought out the first red flag of the session and his second of the day.

Once the session resumed, Barter wasted no time in one-upping his previous attempt and onto the top line of the timing sheets before Marti clocked in a faster lap to make it an all-Campos top three.

The second red flag of the afternoon was then brought out for yesterday’s fastest man, Gabriele Mini, after he found himself in the barriers at turn 10.

Mini made up for his error after the brief stoppage before Barnard brought out another red flag for another incident at turn 10.

It was a free-for-all in the last 15 minutes with Marti emerging victorious. The young Spaniard found a tenth worth of lap time over Mini to round out the afternoon.

It will be the final day of F3’s post-season test at Jerez tomorrow.