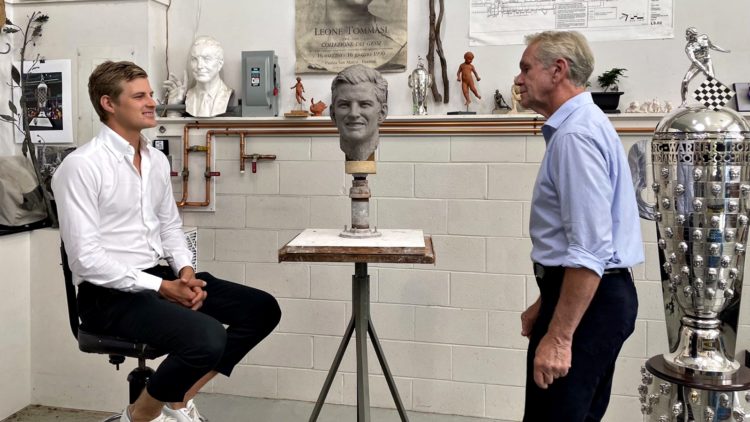 Ericsson sitting next to a facsimile of his own face, which will soon adorn the trophy. Photo: Borg-Warner

When Marcus Ericsson took the checkered flag at this year’s Indianapolis 500, he immediately placed himself among IndyCar history.

He went through the entire scripted celebration that winning the infamous race brings, including drinking a glass of cold milk, flying to New York to ring the bell at the Stock Exchange, and even receiving a call from the King of Sweden.

Another perk of his victory is that his face will forever be immortalized on the side of the Borg-Warner Trophy.

Recently, Ericsson visited North Carolina to view the clay likeness of himself that had been created by master sculptor William Behrends.

The newest Indy 500 winner was pleased with the “amazing” result, and remarked to Behrends that “It’s a bit weird seeing myself, obviously.”

Now that the sculpture has been given a seal of approval, the likeness will be shrunken down from its current life-sized form to a figure just a few inches tall.

It will then be cast in silver and affixed to the base of the trophy alongside the other winners of the historic Indy 500.

The 110-pound Borg-Warner Trophy itself was present at the unveiling, and will continue to make various appearances when the newest addition is complete.

Ericsson still has eight more months to savor the title of ‘Reigning Indy 500 Champion’ before he will defend his victory at the 107th running of the event on May 28, 2023.