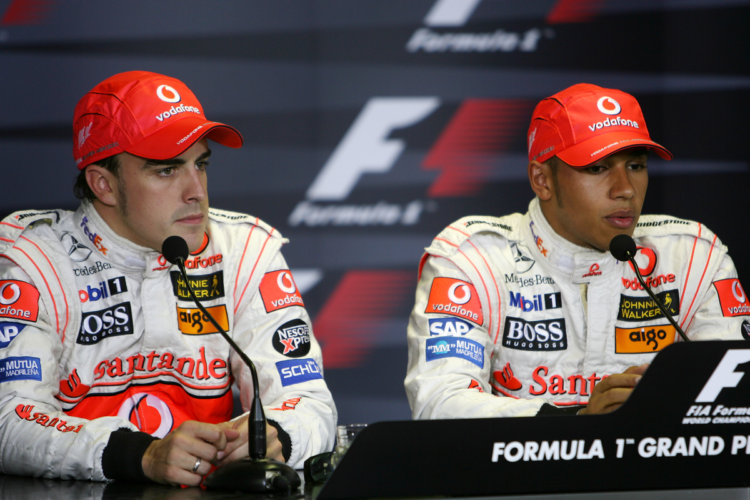 Former McLaren Racing mechanic Marc Priestley has revealed that Fernando Alonso used bribes in the form of envelopes filled with cash to gain favour over Lewis Hamilton in the McLaren garage.

While they share a more respectful relationship nowadays, Alonso and Hamilton’s partnership at McLaren in 2007 ignited a fierce rivalry between the two drivers who fought hard together on-track.

Alonso joined McLaren in 2007 coming off the back of winning two consecutive Drivers’ Championships at Renault with Hamilton stepping into the team as a rookie following his triumph in the 2006 GP2 Championship.

The Brit had an incredible start to his Formula 1 career, reaching the podium in every single one of his first nine races. It wasn’t long before Alonso started to see him as a real threat.

“One of Fernando’s tactics is to try and bring the whole team over to his side of the garage. He tries to wrestle control,” Priestley explained on a recent episode of the PitStop Podcast.

“There was a moment during 2007 where Fernando turned up at a race and when I arrived, Fernando’s manager or trainer is handing out little brown envelopes stuffed with cash to everybody who wasn’t on Lewis’ car.

“I remember opening up the envelope and there was like €1500 or something. It was so dodgy. First of all, you get an unmarked brown envelope and I’m like ‘thanks very much, what’s that?’ and the trainer wanders off and you’re left with this thing and you open it up and it’s literally just full of cash.

“All of a sudden this starts spreading around the team and the only people that didn’t get them were Lewis’ crew. It starts to dawn on us what’s happened here, he’s looking to gain support, he’s trying to encourage people to support his side of this intense battle that they were in.

“On one hand you can say it was a clever tactic but in the end, the team obviously found out about it and made us donate the whole lot to charity which was fine, but it was a little insight into the two different mindsets.”

The 2007 season ended disastrously for McLaren with both Alonso and Hamilton missing out on the Drivers’ Championship by a single point to Ferrari’s Kimi Raikkonen.

The team was also found guilty of a high-profile espionage case when it was reported that Ferrari documents had been leaked by a team member and found their way into the hands of McLaren.

The team were disqualified from their second-place finish in the Constructors’ Championship and received a record-breaking fine of $100 Million.