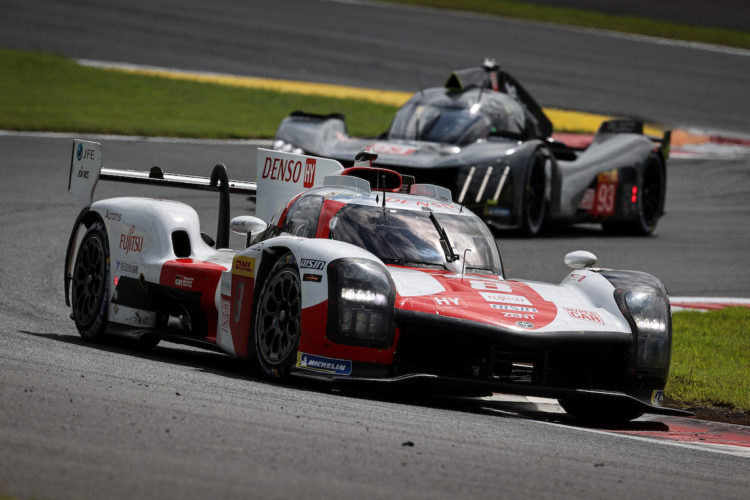 The #8 Toyota GR010 crew Sebastien Buemi, Brendon Hartley and Ryo Hirakawa have won the 6 Hours of Fuji for Toyota, ahead of teammates Kamui Kobayashi, Mike Conway and Jose Maria Lopez in a dominant race on home turf for the Japanese manufacturer.

Toyota led and controlled the entire race, with polesitter Kamui Kobayashi leading the first hour before losing the lead under team orders in the second hour to the team car. From there the #8 crew led and that was the way it finished, with Ryo Hirakawa crossing the line one minute eight seconds ahead of Mike Conway in the #7.

The #36 Alpine A480 of Nicolas Lapierre, Andre Negrao and Mathieu Vaxiviere took third, which means the #8 Toyota crew was able to draw level on points going into the final round at Bahrain in November.

Alpine battles early on for third with Peugeot, with the #94 Peugeot 9X8 sitting in the final podium spot for a while in the first half of the race. Ultimately, though, Alpine had the pace and experience to take that final podium spot — vital for their championship chances.

The #93 Peugeot 9X8 sister team of Jean-Eric Vergne, Gustavo Menzes and Paul di Resta finished fourth, seven laps down on the lead Toyotas. The #93 Peugeot 9X8 of Mikkel Jensen, Loic Duval and James Rossiter finished fifth in class and 20th overall. Both Peugeots required visits to the garage, to fix oil leaks which caused turbo issues, although their pace was much improved compared to at Monza.

Over in LMP2, the #31 WRT Oreca 07-Gibson of Sean Gelael, Robin Frijns and Dries Vanthoor, standing in for Rene Rast, won after a fierce battle with Jota. Eventually, though, WRT prevailed and won by a lap over the #38 Jota Oreca 07-Gibson, with Antonio Felix da Costa, Will Stevens and Roberto Gonzalez behind the wheel at various points throughout the race.

In third was Jonathan Aberdein, Ed Jones, and Oliver Rasmussen in the other Jota, €28 Jota Oreca 07-Gibson. Aberdein spun at the start but had great pace and managed to make his way back up through the field to lead by the end of his double stint. However, the more experienced drivers in the sister Jota and WRT were able to overhaul their lead through the race, with third the best the #28 team could manage.

Ferrari dominated GTE-Pro to take a 1-2 victory, with #51 Ferrari 488 GTE EVO ahead of the sister #52, James Calado and Alessandro Pier Guidi winning followed by Antonio Fuoco and Miguel Molina.

While the Porsches were quick and were able to take pole for the race, they suffered with tyre degradation at the high-wear Fuji, and were not able to keep up with Ferrari over a stint.

Fuoco did take the lead from Calado in the second half the race and built up a five second lead, but the pit-hose cable for the wheel gun became wrapped around the rear wing, costing the car valuable seconds which Calado used to real Fuoco in. Calado then had the pace to overtake Fuoco in the final hour, winning by just three tenths of a second in a hard-fought victory.

The best Porsche could manage was third, with the #92 Porsche 911 RSR-19 of Kevin Estre and Michael Christiansen not possessing the pace of the Ferraris through the race, finishing 31 seconds adrift.

At points through the race it looked as though the Iron Dames might have been able to win it, but with pro driver Sorensen in the #33 Aston Martin car for the final stint, he was able to build a gap and control the race from the lead.

In third was the #777 D’Station Racing Aston Martin Vantage AMR of Charlie Fagg, Satoshi Hoshino and Tomonobu Fuji, who at times also looked like they were in contention for the win, leading at points in the first half of the race. However, they slipped back into third behind the Iron Dames, eventually finishing 16 seconds behind.