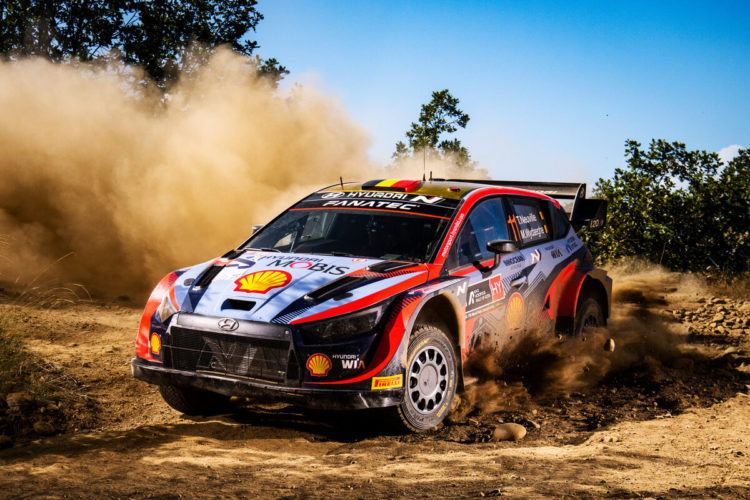 Thierry Neuville leads a Hyundai 1-2-3 at the Acropolis Rally after a day in which drama was everywhere. Despite trailing the leading Fords last night, issues for his rivals meant that Neuville was able to capatilise and put his claim down for the win.

Sebastien Loeb started off the day by extending his advantage to 19s after the first stage, however his and Ford’s day would start to capitulate on the following test. Loeb’s alternator belt failed when approaching the stop point and despite efforts from him and his co-driver to fix the issue, they ran out of time and had to retire the car.

If that wasn’t enough, overnight second place man, Pierre-Louis Loubet, suffered a delaminated tyre on Tarzan which would cost the Frenchman over a minute in time, causing him to fall down the standings.

Neuville would move to the front and stay there for the rest of day despite a small scare with a low battery alarm, nothing affected the cars or the driver’s performance. The Belgian would end the day with a 27.9s advantage over his teammate Ott Tanak going into the final three stages tomorrow.

“It’s been a great day for us…A bit of a hard one this afternoon with some trouble with the car, but we survived, and we are here now”.

Despite a stage win, Tanak was not able to mount a challenge on his teammate. The Estonian suffered from some small differential issue in the morning but after an improvement in the afternoon loop, Tanak would finish 25s ahead of teammate Dani Sordo.

Dani Sordo moved into the podium positions after Toyota man Esapekka Lappi developed a fuel problem on the penultimate stage of the day. This left Elfyn Evans as Toyota’s top driver in fourth but only 7.1s behind Sordo.

Loubet recovered from his setback to stay in the top 5 although the Ford driver would be over two minutes behind. Craig Breen and Takamoto Katsuta followed in sixth and seventh.

Unfortunately, Kalle Rovanpera will have to wait another round for his chance to seal the title. The championship leader hit a tree going through the Perivoli stage and despite being able to continue, he would lose 11 minutes and would suffer significant damage to the car.