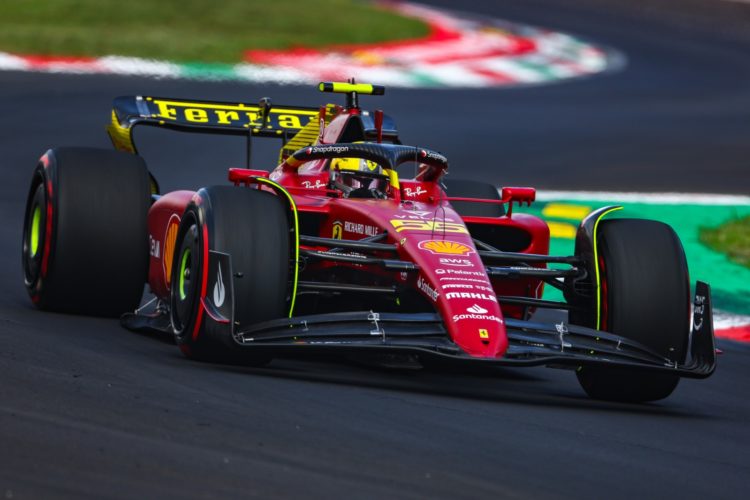 Sainz, who faces an engine penalty after taking on fresh components, clocked a time of 1:21.664s in hot and sunny weather at the high-speed Monza circuit on Friday afternoon.

Sainz’s best time left him 0.143s faster than reigning World Champion Max Verstappen, who also has an engine penalty, albeit only five places.

Verstappen’s best time came on his second push lap on Soft tyres after a lock-up into the first chicane on his initial attempt.

Charles Leclerc was the fastest of the penalty-free drivers, in third position, 0.193s behind his Ferrari team-mate.

Lando Norris was fourth-best for McLaren though faced a deficit of almost half a second to nearest opponent Leclerc at a venue where McLaren was victorious in 2021.

His outgoing team-mate, Daniel Ricciardo, was 11th a year on from his last win.

George Russell complained of bottoming from Mercedes’ W13 as he classified fifth, while seventh-placed Lewis Hamilton described the car as unstable during his long run.

They were split by Red Bull’s Sergio Perez.

Alpine claimed eighth and ninth courtesy of Esteban Ocon and Fernando Alonso while Alexander Albon rounded out the top 10 for Williams.

Alfa Romeo and AlphaTauri finished line astern from 12th through 15th, ahead of Haas’ Kevin Magnussen, with Mick Schumacher at the back after a truncated day.

Schumacher, who stepped aside for Ferrari reserve driver Antonio Giovinazzi in the first session, mustered only nine laps before stopping due to an engine-related issue.

That brought out the red flags midway through the session while his VF-22 was removed.

Aston Martin was slowest of the 10 teams, with Sebastian Vettel and Lance Stroll over two seconds off the pace, faster only than Nicholas Latifi and the stricken Schumacher.