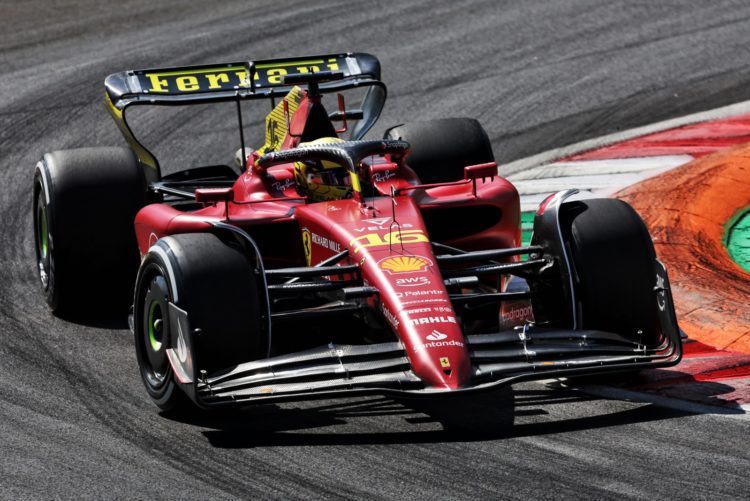 Leclerc, winner of the Italian Grand Prix in 2019, clocked a time of 1:22.410s in hot and sunny conditions at the high-speed circuit.

That left him 0.077s clear of team-mate Sainz, who had a moment through the Ascari gravel late in the session, after the opening hour of track activity.

A minute’s silence was observed by Formula 1 personnel in the pit lane, in memory of Queen Elizabeth II, 10 minutes before the start of the session.

Several Formula 1 teams are also running tributes in honour of the late monarch, who died on Thursday afternoon aged 96.

It was also confirmed during the session that several drivers, including Sainz and title leader Max Verstappen, will take grid penalties for component changes.

Verstappen, chasing a fifth successive victory but a first at Monza, finished the session in fifth, behind Mercedes drivers George Russell and Lewis Hamilton. The reigning champion did not set his best tyres on Softs.

Alpine began the weekend in promising form, with Esteban Ocon sixth and Fernando Alonso seventh, while Yuki Tsunoda was eighth for AlphaTauri.

Alexander Albon was 11th for Williams at a circuit that is expected to suit its FW44, ahead of Zhou Guanyu, 2020 winner Pierre Gasly, Sergio Perez and Lance Stroll.

Italian driver Antonio Giovinazzi had his first Formula 1 outing of the year with Haas, replacing Mick Schumacher for the one-hour session.

Giovinazzi, who previously tested for Haas in 2017, raced for Alfa Romeo between 2019 and 2021, and currently holds a reserve driver role with Ferrari.

Mercedes reserve driver Nyck de Vries had his third practice outing of the year, this time with Aston Martin, to fulfil one of the team’s two young driver quotas.

De Vries, who previously carried out duties with Mercedes and Williams, replaced Sebastian Vettel in the AMR22.

De Vries finished 19th of the 20 participants after making a mistake through Ascari on his hot lap, running through the gravel as a result.

Second practice is scheduled to begin at 17:00 local time.