Hamilton: Ricciardo far too talented to lose F1 drive for 2023 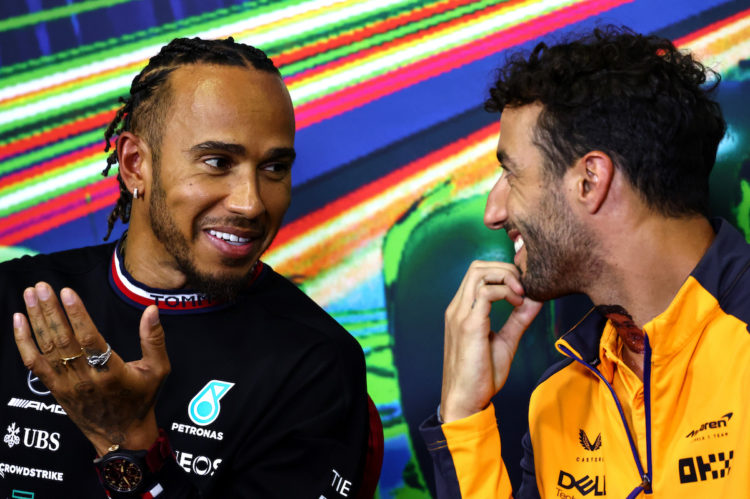 Lewis Hamilton has praised Daniel Ricciardo, stating the Australian is “far too talented” to miss out on a Formula 1 seat next year.

Ricciardo will depart McLaren at the end of the 2022 campaign, with his deal with the Woking-based squad being cut short early by one season amid a run of underwhelming performances.

The 33-year-old has admitted that he is keeping all options open for 2023, which could include sitting out the season.

He has been linked with moves to Alpine and Haas, but also to Mercedes, potentially taking on a third driver role with the reigning Constructors’ Champions.

Although Hamilton has embraced the possibility of working with Ricciardo, he asserts that the former Red Bull driver should still be racing in F1 beyond the current year.

“I think he should be racing, personally,” Hamilton said. “I think he is far too talented and he deserves the right to be amongst us all racing.

“But of course, if he is a part of our team that would be great, but that role is not what really is best for him. If I was managing him, he’d be racing.”

Ricciardo has previously said that he is not interested in a role outside of F1 for next year.

With a number of weeks having passed since he announced his McLaren departure, Ricciardo states that he has no plans in place for 2023 and beyond.

“The truth is I’m keeping every option open, not just for next year, but for the future,” he said.

“I still don’t know what next year looks like. As Lewis said earlier, I do want to be on the grid and I do want to race.

“I touched on it a few weeks ago that although this has been a challenging time in my career, it hasn’t taken the love of the sport away from me and that desire to still be here and still compete.

“So obviously many talks or thoughts about next year and beyond that, but as I said, I’m still not sure what that looks like.”