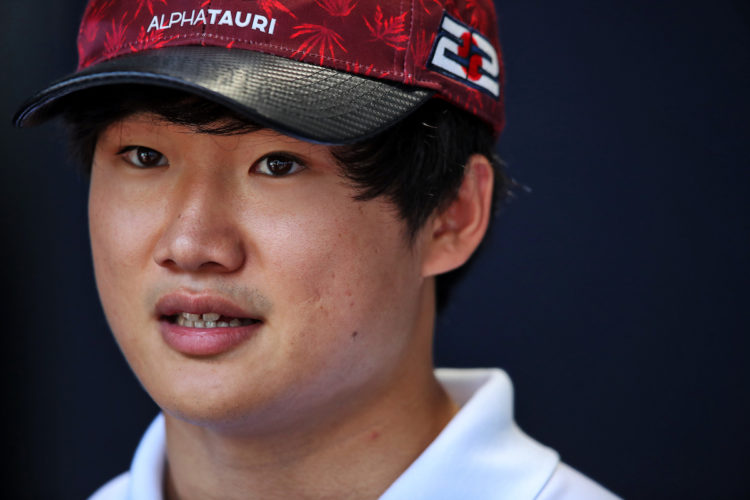 AlphaTauri’s Yuki Tsunoda has responded to those who suggested that his retirement from the Dutch Grand Prix last Sunday was carried out to help Red Bull.

Tsunoda stopped on the circuit on lap 44 of the race, complaining that one of his tyres wasn’t fitted correctly.

He then returned to the pit lane where he was serviced, and after emerging back onto the track, he pulled over once again while asserting an issue was still present.

The incident caused a Virtual Safety Car, allowing Max Verstappen to obtain a cheap pit stop from the lead of the race without conceding track position.

Some suggested that AlphaTauri helped its sister team with the on-track stoppage – a claim that Tsunoda has offered a steely response to.

“It’s just a super simple fact that there was an issue in the car and we’ve confirmed it was a differential issue.

“Of course, the situation made it a little bit confusing. But there’s not such room to complain to the team, myself and also especially to Red Bull [for] such, to be honest, a crazy, crazy story.

“I was also running in a good opportunity to score points so there’s not any reason to help Max, you know?”

Mercedes team boss Toto Wolff hinted at the conspiracy, stating that he would look closer at Tsunoda’s retirement if his squad was in a championship battle.

“Investigate as much as he wants,” quipped Tsunoda. “There’s not anything new that’s going to pop up.”

Although AlphaTauri is owned by Red Bull, Tsunoda iterated that the two organisations are completely separate, and that AlphaTauri has its own race to focus on during grand prix weekends.

“I didn’t know Max was driving in P1 or P2. I don’t care about Red Bull Racing because I’m just focusing on my job,” he said.

“Lots of people think about what is going on. There’s not any connection between Red Bull and AlphaTauri for those things.

“In that case, why don’t they ask Pierre? I was in front of him.”

Tsunoda added, speaking about fans who conjured conspiracy questions: “I want to ask how your brain is created, what your brain looks like, scan the MRI and see what’s wrong.

Tsunoda is set to be demoted 10 places for the start of this weekend’s Italian Grand Prix, after picking up his fifth reprimand at Zandvoort.