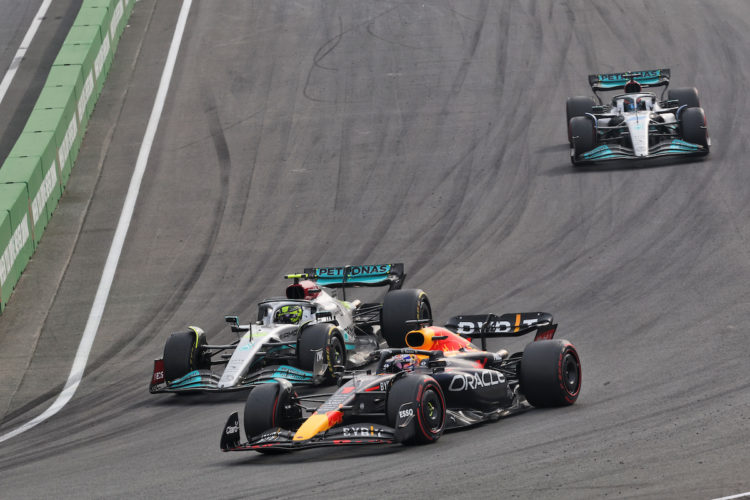 Alfa Romeo’s Valtteri Bottas came to a stop on the Zandvoort track on lap 55, with the Safety Car neutralising the race.

Max Verstappen was pitted from the lead of the grand prix for fresh Soft tyres, as was George Russell, who was briefly running in front of Verstappen after the Dutchman made his stop.

Mercedes opted to leave Lewis Hamilton out in front on older Medium compounds, with Verstappen making quick work of the seven-time World Champion at the restart.

Although Verstappen went on to take his fourth successive race win, Horner concedes that the race was far from easy.

“It was quite a complicated strategic race,” he said. “For us the two stop [strategy] going into the race was the faster race.

“We had the new set of tyres with Max that we felt best strategically to use to make sure we got a good start and use in that first stint.

“That part all went to plan and then of course the VSC made life a little trickier because the pace of the Mercedes seemed pretty strong on the Hard tyre.

“But they got a huge stint to do on it. At that point in time we were going to go probably back to the Soft tyre. We knew we’d probably concede track position but we had the pace with the offset.”

“The bigger call came towards the end of the race when there was the full Safety Car where you’ve got your home driver leading in front of 105,000 people and you decide to pit him for the Soft tyres and concede track position behind two Mercedes,” he said.

“So I was quite surprised that they didn’t leave George out strategically as a rear gunner for Lewis so when he pitted it gave a straight fight between Max and Lewis with a tyre offset.

“By the time they came past us on the pit wall, Max was already alongside. And thereafter a matter of controlling the race. So, tactically a tough one but the pit wall made the right calls.”