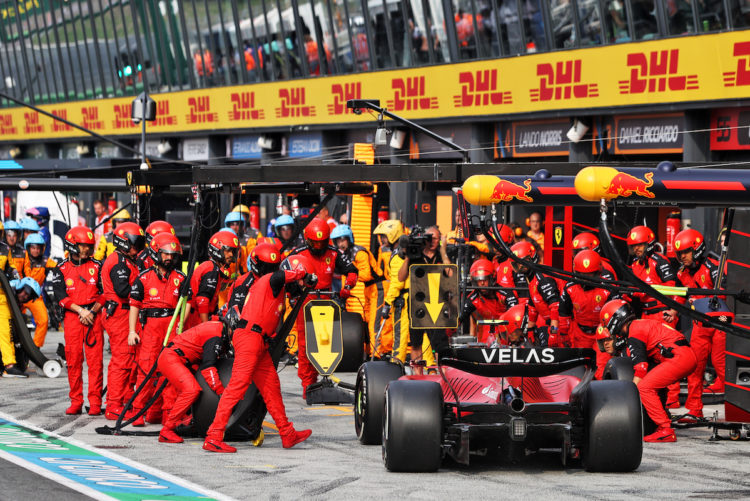 Sainz made his first stop of the race on lap 14, swapping his Softs for a fresh set of Mediums.

However, as he pulled into his pit box, only three of the tyres were ready and he was forced to wait several seconds before his left rear was delivered and attached.

It cost him track position, and from there, the Spaniard endured a difficult race. Later in the grand prix, he was released into the path of a rival car, which copped him a five-second time penalty.

“The pitstop with Carlos was a real mess, we called him in late and the tyres weren’t ready,” Binotto told Sky Italia.

“Just a mess. With Charles the strategy could have been maybe favoured by a Safety Car, but it came too late. It’s a shame, but he was also limited by the lack of pace.

“I’m sorry for Carlos, the unsafe release was not his fault and he was penalised for that. We will also be looking into what happened on Lap 1 [with Hamilton], maybe he had some damage even if it didn’t look so, but he had no pace right from the start.”

A mammoth gap now rests between Red Bull and Ferrari in the Constructors’ Championship, while Charles Leclerc has a similar deficit to Max Verstappen in the Drivers’ standings.

Binotto asserts that Ferrari is no longer focused on the championship, as it instead looks to wriggle from its current troubles.

“Today we are surely not satisfied,” he said. “We’ve had some worries since Hungary, where we weren’t fast enough – and this happened again today. Why, maybe some fatigue, maybe something else.

“Third race in a row where we aren’t fast, that is what we need to understand.

“Our focus is not on the championship, but on improving and understanding where we lost performance, right now.”

“What you’re seeing today does not constitute a worry for 2023 – if anything, it will help us to avoid having the same issues next year.

“The 2023 car will be different from the 2022 car. It will be important now to understand where we need to gain performance.”