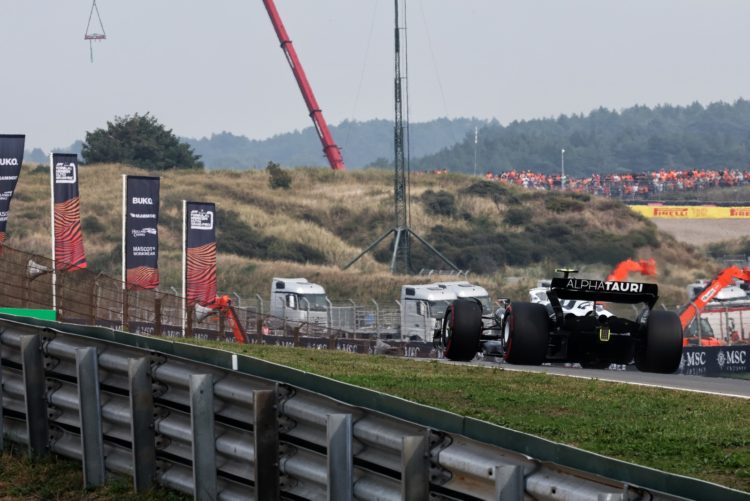 AlphaTauri has strongly condemned observers who suggested that there was any “foul play” behind Yuki Tsunoda’s stoppage at Formula 1’s Dutch Grand Prix.

Tsunoda stopped on track, believing he had a loose wheel, before returning to the pit lane after completing a slow lap.

Tsunoda returned to the circuit but was swiftly told to stop the AT03 and did so between Turns 3 and 4, which required the Virtual Safety Car.

Red Bull had committed to a two-stop strategy with Max Verstappen and the VSC allowed him to make a stop while minimising time loss and retaining the lead, prompting Mercedes to bring its drivers in anyway.

Some social media users suggested the VSC was conveniently timed for Verstappen.

On Monday AlphaTauri, which explained post-race that Tsunoda suffered a failure, issued a strongly worded statement rejecting such comments.

“It is incredibly disheartening to read some of the language and comments directed at our team and towards Red Bull Racing’s Head of Strategy Hannah Schmitz,” read the statement.

“Such hateful behaviour cannot be tolerated and to entertain accusations of foul play is unacceptable, untrue and completely disrespectful towards both Hannah and us.

“We have always competed independently, fairly and with the highest levels of respect and sportsmanship.

“Yuki had a failure that the team didn’t immediately detect which caused him to stop on track. To suggest anything different is insulting and categorically incorrect.”

Red Bull outlined post-race that the VSC actually hurt Verstappen’s race as he wanted to fit Softs for the final stint, but the VSC was too early to do so.

The VSC caused by Tsunoda was ultimately followed by a full Safety Car after Valtteri Bottas also stopped on track.