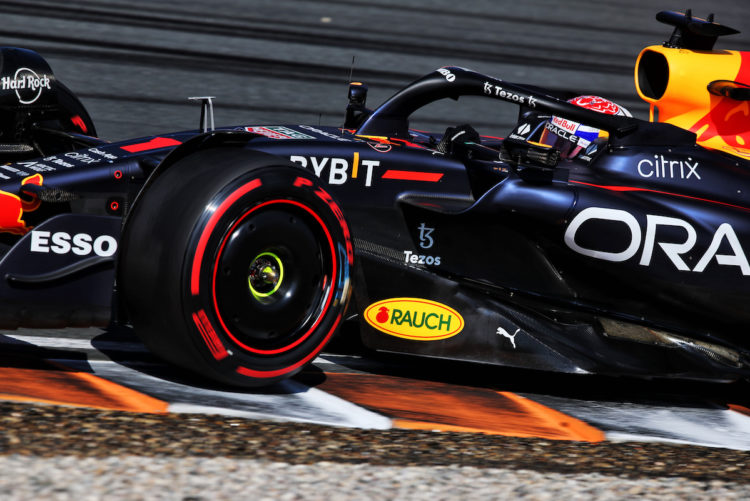 Formula 1 returned from the summer break with a shock, as Red Bull’s performance in Belgium annihilated Ferrari, in a duel that had up until now been fairly balanced.

The triple back-to-back of Spa, Zandvoort and Monza does not leave much room for reflection and we will have to analyse all three GPs as one big event to really understand if a gap has opened between Red Bull and Ferrari to such an extent. Under accusation for having changed the values ​​of the cars is the technical directive number 39 (TD39), which has tightened the checks on the floor and set a metric to be respected with regard to porpoising. Porpoising will not be as relevant as in Belgium on the Dutch circuit of Zandvoort, but it could be very important again in Monza. But is it really the fault of TD39 why Ferrari did so badly in Belgium?

The directive number 39 implemented by the FIA ​​starting from the Belgian Grand Prix is ​​nothing more than an update of the current regulation to counter two aspects: the porpoising and the illegal bending of the plank (the bottom of the floor).

Regarding the first aspect, the one related to porpoising, the FIA ​​has decided to intervene by highlighting the issue a safety concern. After the problems that arose in Baku, the Federation’s technical department has studied the issue and implemented a metric by which a maximum range of allowed vertical oscillations can be established. Using accelerometers installed on the chassis, the FIA ​​monitors (only down the straights) the frequency of the car’s oscillations. If a car does not fall within the values ​​established by the metric they will be forced to change its set-up – that is to lift the car off the ground and therefore reduce the ground effect – or face disqualification.

The question linked to the oscillations of the plank and skid blocks is different. The FIA ​​intervened after the suspicion arose that some teams (mainly Ferrari and Red Bull) had come up with a way for the rear of the floor to bend. The attention on this aspect came from Mercedes, which suggested to the FIA ​​that some teams use a gray area to flex the floor beyond the limits, for an aerodynamic advantage. By regulation, the plank – which is made up of a resin called permaglass – can be modular and can be divided into up to three distinct blocks.

By regulation, the FIA ​​carries out checks on both flexing and the thickness of the board. It must have a thickness of 10mm and cannot wear more than 1mm. As for flexing, the maximum deviation is 2mm with verification carried out in three distinct points of the plank. Some teams manage to circumvent the 2mm deviation in the intermediate areas of the three check points, especially in the rear area before the diffuser. The aim is to recreate a third venturi tunnel, to the benefit of downforce. At Spa the FIA always verifies the flexion of the board in the three pre-stable points, but has widened the radius of the three points by 15mm in order to cover a greater area.

Ferrari says TD39 has no impact in Belgium

From what had emerged in Belgium regarding the great difference between Ferrari and Red Bull it seemed that the technical directive TD39 may have had a very negative impact on the performance of the F1-75. Over the course of the Belgian weekend, Ferrari suffered in the stretches in which in the rest of the season it had expressed its best qualities, namely the speed of the corners. Undoubtedly Spa is much more critical than Zandvoort for porpoising, especially for the bumps that are there.

The directive may have forced almost all the teams, and not just Ferrari, to adopt a very rigid and higher structure from the ground, to avoid consuming too much of the plank and risking a disqualification. We have often heard over the radio Sainz’s engineer call the Spaniard’s attention to avoiding certain bumps and kerbs. This has raised a lot of suspicion that the directive may have seriously penalised Ferrari, and strengthened Red Bull.

Speaking with some technicians of the Italian team, there was no great concern about the directive. According to them, the reasons for this performance are to be found on other aspects. Due to the intrinsic characteristics of the single-seater, the F1-75 has always performed better with high downforce set-ups and in a warm climate. In Belgium, two rear wings had been used over the weekend, including a very discharged and completely new one. 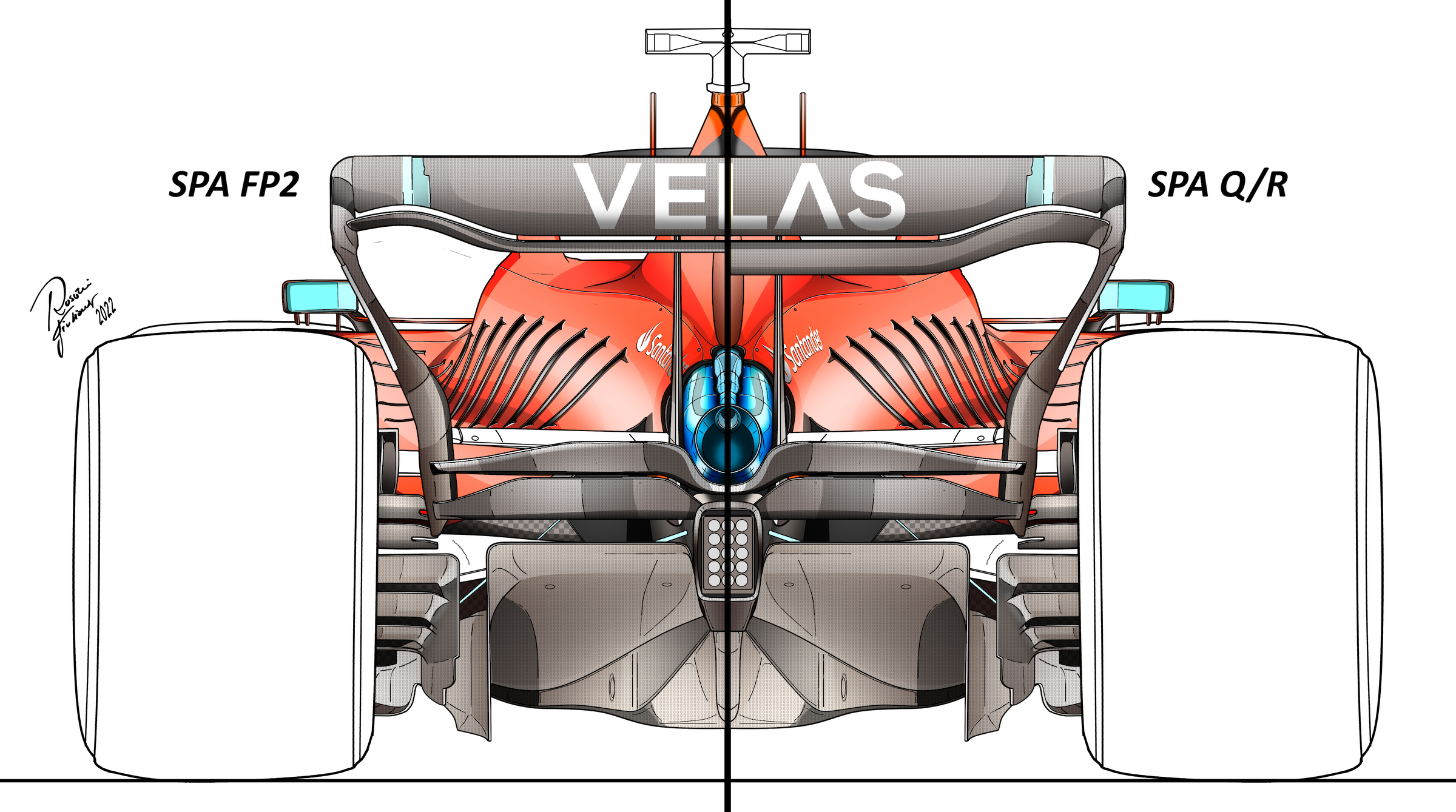 The new rear wing, which was initially thought to be used in Belgium as well, turned out to be just a test for Monza. The cold and tyre degradation would not have allowed Ferrari to be safe with that specification, which would have rewarded efficiency down the Kemmel Straight.

The long track at Spa widened the real gap from Red Bull, as on a shorter track the difference would have been smaller. The F1-75 felt stiff and more grumpy but it was said this was necessary in order not to destroy the pavement in the Eau Rouge compression. The only team that didn’t seem to suffer from this was Red Bull. According to Ferrari, it is therefore the Spa circuit that has enhanced the characteristics of the RB18. In addition, there had already been performances during the year in which Ferrari had clearly outperformed the RB18, taking Australia as an example. In the Netherlands, Ferrari performed significantly better, on a rather winding circuit and much less fast than Spa. The choice of medium-high load set-up led Ferrari to mount the rear wing that had only been seen in Bahrain. 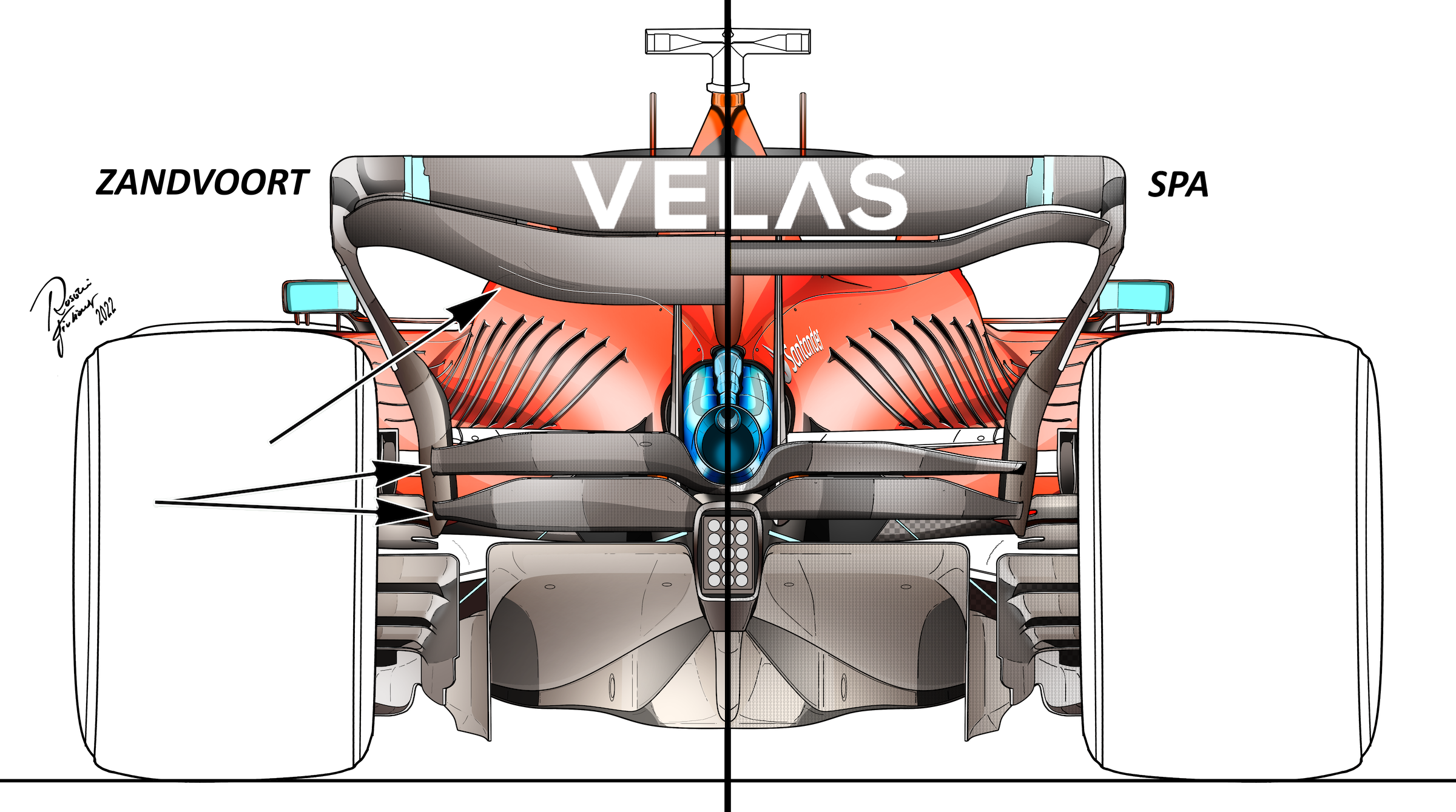 The RB18 from Budapest onwards seems to have become the best car, but only if driven by Verstappen. The Milton Keynes team introduced a series of innovations starting from Monaco onwards which had the goal of having a car with as little understeer as possible, just as Verstappen likes. At the same time, Sergio Perez has suffered a lot from this. He does not like a car that is very stuck on the front axle, and his performance has dropped significantly compared to his team mate. The Mexican can be seen in difficulty in finding the balance of the RB18, especially in circuits where he counts on having a lot of confidence and feeling. From the point of view of the results, however, the choice of development of Red Bull is proving to be a winner.

At Spa the RB18 was equipped with a new bodywork in the rear area, retouching the major bodywork update that was done at Silverstone. It is also from Hungary that Perez and Verstappen use two different floors, with the Mexican continuing to use the Ferrari-style slot version also introduced in Great Britain. 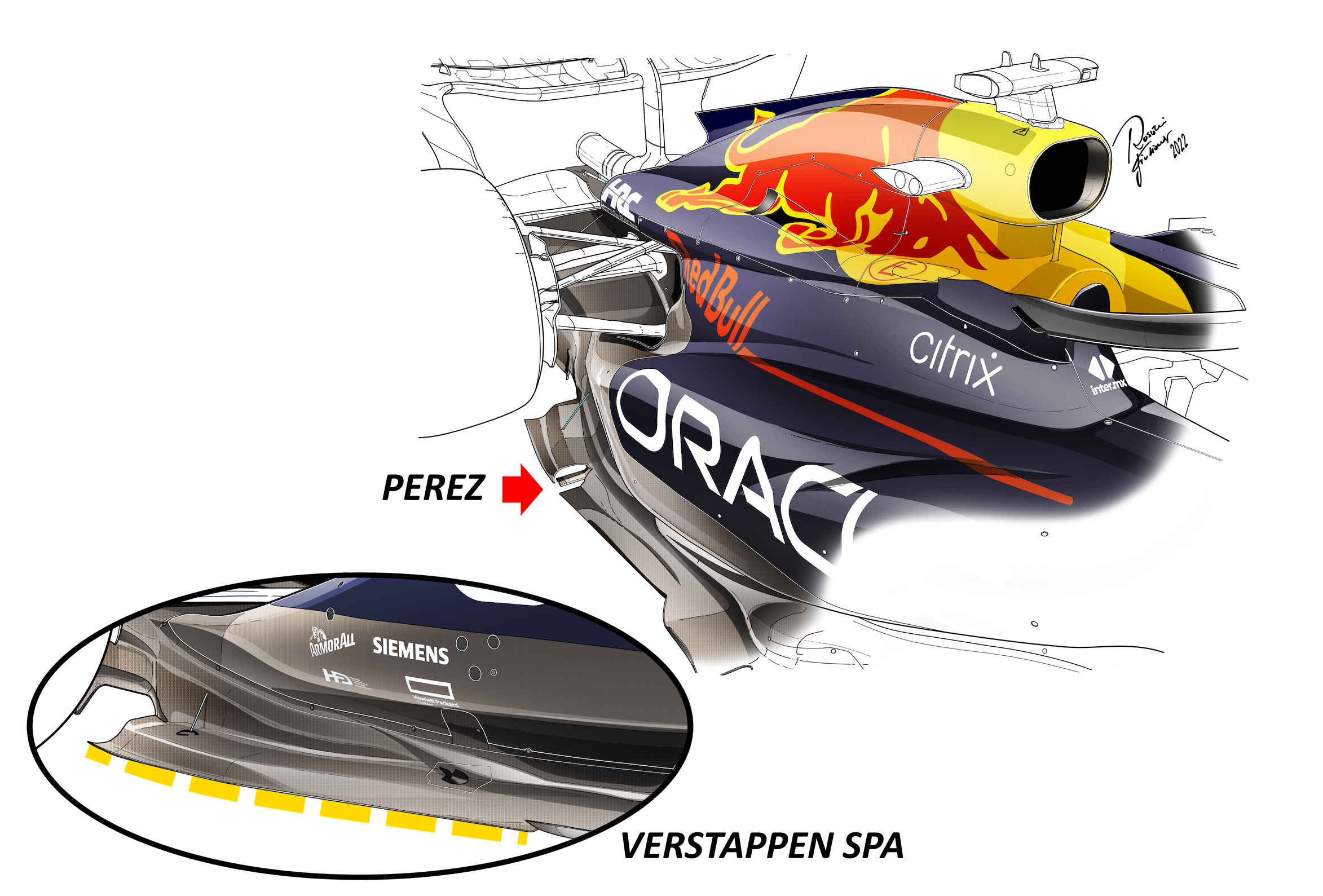 At Zandvoort this difference between the two drivers was maintained, while the fact that Red Bull has homologated a new lighter chassis aroused a lot of curiosity. Since the beginning of the year, the RB18 has been suffering from being “overweight”, with an estimated initial value of almost 18kg over the minimum weight allowed for a car empty of liquids of 798kg.

Red Bull has denied using the new 4kg lighter chassis in Belgium, and it is more likely that its debut will be for Singapore. The issue that arouses dismay concerns the budget cap, where many do not explain how it is possible to homologate a new chassis, which is an extremely expensive element. In fact, many teams are already homologating new chassis, but for the 2023 season. It will be interesting to see if the new lightened chassis of the RB18 can also be maintained on next year’s car. It would be an unprecedented RB18-B in 2023 but it is still premature to say that this can happen.